Dairy cows, inside or out? 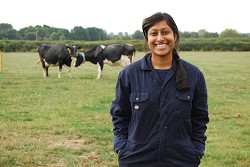 Researchers at Harper Adams University College are investigating whether the amount of grass dairy cows have access to affects their preference to be inside or out.

Traditionally, pasture is seen to provide cattle with higher welfare standards than indoor housing systems, but with the move to larger-scale dairy farms, cows are now being housed all-year round.

Trials at Harper Adams in Shropshire hope to find out how important being at pasture is to dairy cows and how strong this preference is.

“We are also assessing how important being at pasture is to them by using ‘consumer demand theory’, so we put a price on gaining access to the grass and see if they are willing to pay this price.

“In this case, it’s having to walk different distances to access the pasture.”

During this part of the experiment, cows can choose between being indoors or at high or low herbage, but for one week these options are available at 35m, and a second week at 265m.

Feed intake is monitored using Calan Bins by giving each cow a collar transponder and specific bin to eat from, and the amount of Total Mixed Ration (TMR) that they consume is measured.

Priya is also using methods to calculate how much grass the cows are eating. She said: “We dose the cows in their feed with an indigestible feed marker (alkane C-32) in order to determine their total intake.

“By subtracting the total intake from the TMR they consume we can find out the amount of grass they are eating, which is particularly important so we can see what effect being at pasture has on their TMR intake.

“If it decreases their intake then that could be detrimental to milk yields, but if they are eating grass and all of the ration then this could potentially increase yields.”

The final part of the trial is a group of continuously housed cows which have their feed intake recorded using Ric bins. Again, cows are given specific bins to eat from.  The time budget of these cows are also being recorded via manual observations.

By comparing this information with the cows that have access to pasture, the researchers can assess animal welfare measures such as behaviour and production measures such as feed intake and milk yields.