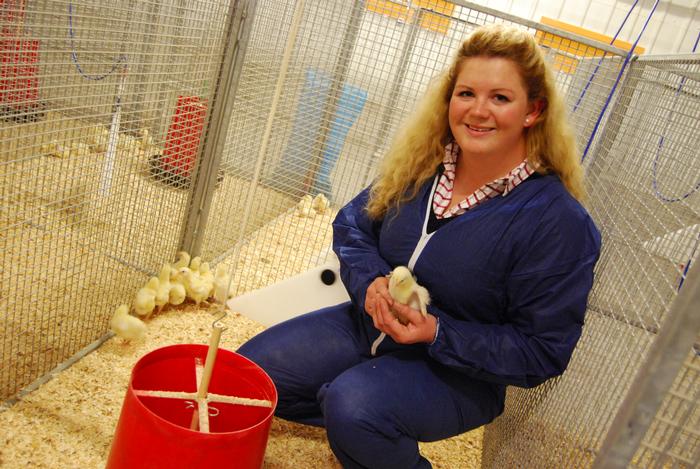 Research being conducted by a final year Harper Adams agriculture student is investigating the potential of an alternative protein source for use in poultry diets.

Amy Sharpe is looking at the effect of different storage conditions on DDGS, known as distilled brewers grains, when used in the diets of broiler chickens, and whether it has an impact on their performance.

Distilled brewers grains are a by-product of bio-ethanol production. As demand for renewable energy increases, it is anticipated that the demand for bio-ethanol plants will also increase.

The 22-year-old said: “If we can find a way to use the brewers grains in poultry diets in higher quantities, it has the potential to really benefit producers as the grains are a cheap source of alternative protein.

“Although brewers grains are already being fed to poultry, there is a lack of information regarding the effects storage has on feeding quality. As the grains have a high fat content, storage may indeed affect the performance of it.”

For her research, Amy used 140 one-day-old chicks, fed the same starter ration for seven days and reared under heat lamps.

The birds were then split into pens, with two birds per pen, and fed one of six different treatment diets. These were each replicated ten times, to allow for anomalies.

Amy from Woodhall Spa added: “After feeding the chicks the diets for 14 days, they were weighed. This weight gain data was used alongside the feed conversion ratios to enable us to analyse whether there is a statistical difference between each of the treatment diets.

“This can then be used to work out whether storage of the grains does affect the performance or not.”

Once completed, Amy’s work will be used to provide a basis for further research on a larger, commercial scale.

It was her placement year at Moy Park through the British Poultry Council scholarship scheme that inspired the subject of her research. She now hopes to secure a career within the poultry sector.