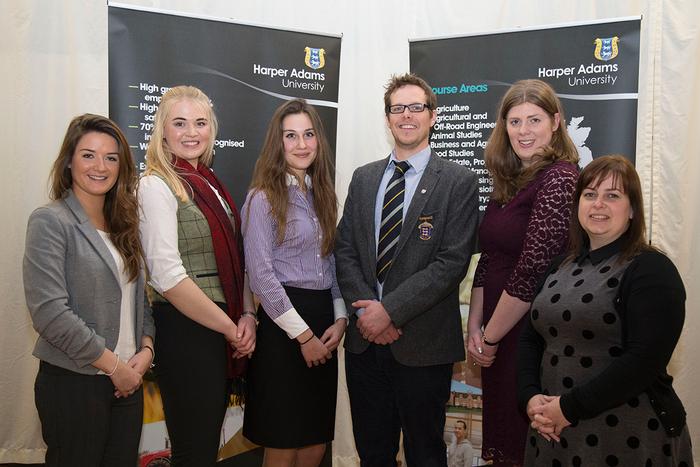 Five Harper Adams University students have benefited from the generosity of their predecessors thanks to scholarship awards from the Harper Adams Club alumni association.

The 20-year-old Food and Consumer Studies, who previously attended Gosford Hill School, said: “Receiving the Scholarship was an honour and I am very grateful to the Harper Adams Club for giving me this opportunity.

“It is a great incentive to work even harder this year to achieve the best grades I can. I would like to one day be involved in a large organisation working towards a sustainable food culture, both nationally and internationally,” added Anna, a keen runner and horse rider.

Michelle Evans, 22, from Church Stretton, Shropshire, received the Harper Adams Club Final Year scholarship. The former Ludlow College and Church Stretton school pupil, who is due to graduate with BSc (Hons) Food, Nutrition and Well-being this year, said: “The scholarship is so valuable to me in my final year of study.  It is nice to not have to worry about supporting myself financially while I am working on my dissertation and other assignments. Thank you to the Harper Adams alumni who are supporting me.”

Michelle is also a Faccenda Scholar through the British Poultry Council Scholarships scheme. She worked for Faccenda during her placement year, received sponsorship in years two and four and will be starting on the company’s graduate scheme after completing her degree.

She said: “I feel very honoured to have been selected to receive the Harper Adams Club Postgraduate Scholarship, I would like to thank the club as the scholarship will assist me greatly with my final year research project.” Jenny spent her placement year with MI Technology in Preston and her ambition is to become a test and development engineer.

She said: “This award means that I can concentrate more on my studies and worry less about my finances. Also to know that someone feels that I am worth investing in is a huge confidence boost.”

Victoria completed her placement year at Staffordshire Wildlife Trust and has developed a keen interest in agriculture during her time at Harper Adams, so much so that she hopes to continue at the university and complete a Masters degree in Integrated Pest Management.

Beth worked for Agrovista during her placement year and would like to work in an agronomy, trials or farm advisory role after graduating.

Could drones be used to lead sheep? Posted 16 October 2019