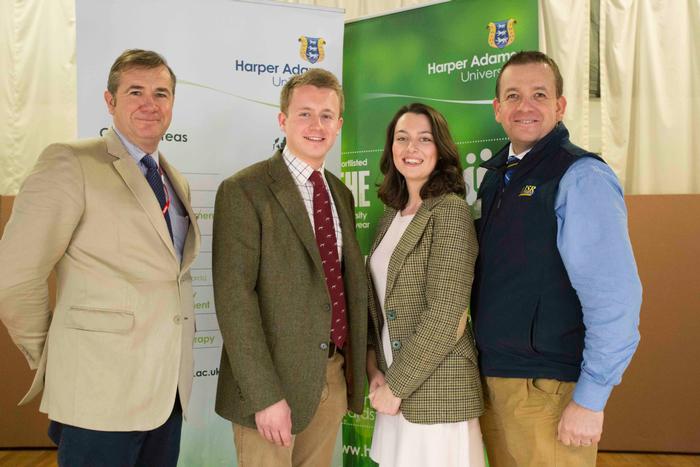 JSR Farms have chosen their first ever scholars from Harper Adams University.

Two students have won scholarships worth £4,500 plus paid placement year jobs with JSR.

The first is Sophie Boyce, 22, from Thirsk, North Yorkshire. Sophie is a second year BSc (Hons) agriculture with animal science student and is excited for her placement year with JSR.

She said: “I feel really proud to be a scholar, as well as quite relieved that I have a good placement sorted out in plenty of time! The scholarship money will be so helpful.

“When I came across the JSR stand at the university scholarship fair, the staff were really friendly and informative. I have no previous experience working with commercial pigs but was very interested in the range of opportunities in the industry. I was particularly drawn to this scholarship due to the variety it involves - it will allow me to continue developing my skills in the arable and beef sector too.

“The scholarship includes a 15-month placement, at JSR Farms in East Yorkshire. I will be spending time in all areas of the business - with the arable team during harvest and cultivations, getting an insight into the stabiliser beef herd and commercial pigs over the winter months, followed by assisting with the potato harvest in spring before a second harvest in the summer,” explained Sophie.

“Currently, I’m not sure which sector I would like to work in after I graduate, but I am hoping my time at JSR will help me to make that decision. Working for a large, progressive company like JSR is appealing as I feel it would offer me security and the opportunity to progress in the future.”

Also receiving the JSR Scholarship will be Oliver French, 21, from Barton-on-the-Heath, Gloucestershire. Oliver is currently in his second year of the BSc (Hons) agriculture with crop management course.

He said: “I am very proud to have been awarded the scholarship, which I believe will be of substantial benefit to my career. I am excited to start working for JSR – the company has a great reputation and I wanted to become a part of that.

“I applied for the scholarship because I was interested in working with such a large-scale, multi enterprise business. Working with pigs was of particular interest. I was also keen to have the chance to learn new skills and work in a different part of the country,” added Oliver, whose ambition is to become a farm manager, perhaps on a large estate, before ultimately beginning his own farming business.