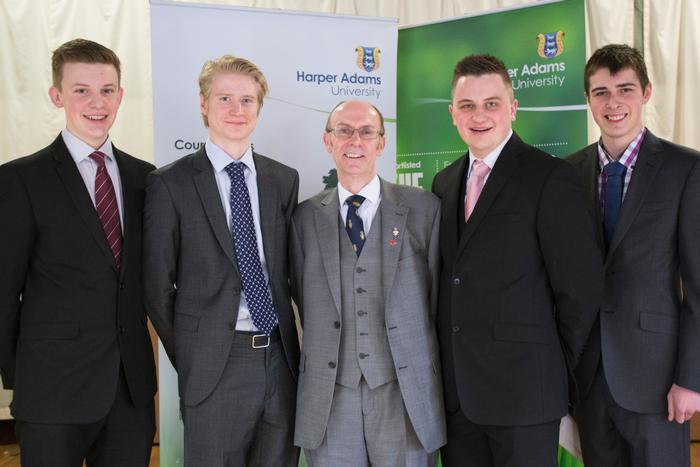 Four students at Harper Adams University have received scholarships from the Douglas Bomford Trust to support their engineering studies.

James Charnley, a final-year Agricultural Engineering with Marketing and Management student, said: “I applied for the award to gain financial assistance for my final year research project. I am delighted to have received it and grateful to have been chosen as a scholar.”

James, 22, from Chorley, Lancashire, who completed his placement year with JC Bamford Excavators (JCB), hopes to become a skilled agricultural engineer who can work closely with marketing departments.

The DBT award was one of three scholarships received by William Ashton, 19, an MEng agricultural engineering student, from Leyburn, North Yorkshire. He said: “I applied for these awards because I wanted to form links with companies in the industry and also to become more involved in the Institution of Agricultural Engineers which is a sister charity with the Douglas Bomford Trust.

“Since being given these awards, I feel more confident in my abilities and that I’ve been given a helping hand towards by career ambitions.”

Thomas Sutton, 22, a fourth year MEng Agricultural Engineering student, from Nuneaton in Warwickshire, said: “Being at Harper Adams has engendered a passion for agricultural engineering, which has led to me investing a significant amount of my own money on projects which I complete in my own time.

“The trustees at the Douglas Bomford trust are people I look up to for the work that they complete, and I understood the values of the trust and how they support people completing extracurricular work towards engineering.  It is for this reason that I looked to them for support.

“I was over the moon when I found out that I got the award, as I am fully aware of the calibre of students that have received the scholarship in the past, and to be among these names gave me immense pride.”

“I am grateful to the DBT for giving me funds to help with my studies. The generosity of the award is much needed to replace my old laptop and other equipment.

John, 18, from Congleton, Cheshire, said his ambition was to “work in improving the efficiency of farming techniques and practices”.