Drones are already in use on many farms in the UK, however, I believe the industry is ready for a new wave of more advanced drone technology." 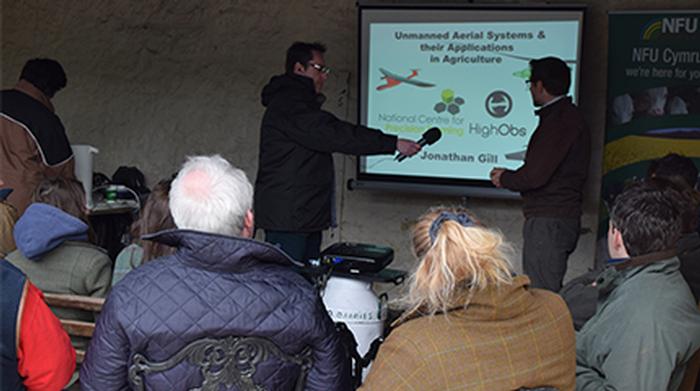 Two Harper Adams members of staff spoke to young farmers about the future of drones in agriculture, after an invitation from Sarah Price of NFU Cymru.

The precision farming event was for young farmers from Glamorgan and Monmouthshire NFU.

Jonathan talked about what he sees as the potential roles of drones in the agricultural world: “Drones are already in use on many farms in the UK, however, I believe the industry is ready for a new wave of more advanced drone technology.

“They will be used in the future by many farmers as just as another tool.

“The second generation of drones will see us take the drone system into the real farm environment to do work for us, like seeding or spraying.

“Drones can already be used to sprinkle bugs and to actually carry things from A to B. You can get them to work on the inspection of your vehicle, so you can see around your tractor.”

As a trained Unmanned Aerial Systems (UAS) pilot, Jonathan also has an insight into the potentially high cost of this technology: “It depends what particular job you’re wanting the drone to do. I’d say an agricultural drone system would cost a maximum of around £20,000, but the cost is always coming down.”

Due the extremely windy conditions, the planned drone demonstration was unfortunately cancelled. The presentation concluded inside using a mini quadcopter.

The controls were handed to the youngest of the young farmers who mastered the mini drone very quickly.

The event was recorded and aired on BBC Radio 4’s Farming Today.