Fusarium seedling blight is a major seedborne disease of cereals leading to poor establishment. Recent work has focused on the epidemiology and chemical control of this disease. Issues such as seedborne infections and the effects of soil temperature and water have been investigated under controlled conditions and in the field.

Fusarium head blight is caused by a complex of plant pathogens including Fusarium species and Microdochium species. The disease occurs on cereals and can result in reduced yield and the contamination of grain with mycotoxins. Detailed studies at Harper Adams have investigated the epidemiology and control of this disease. 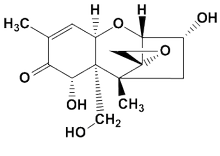 Fusarium mycotoxins occur in small grain cereals as a result of Fusarium head blight infections caused by several Fusarium species.  The most important mycotoxins within cereal production are deoxynivalenol and zearalenone produced by Fusarium graminearum and F. culmorum.  European legislation was introduced in 2006 setting maximum limits for these mycotoxins in cereals and cereal products for human consumption.  A European recommendation was published in 2013 to gather further data on the fusarium mycotoxins HT-2 and T-2.

Detailed studies at Harper Adams have investigated the impact of agronomic factors and climate on the production of these toxins in small grain cereals and their distribution within mill fractions.

Rhizoctonia solani is a destructive and economically important pathogen of potatoes causing stem and stolon canker. Research at Harper Adams has shown a clear relationship between infestations of the potato cyst nematode Globodera rostochiensis and infection of potato stolons by R. solani. A current research project is investigating the epidemiology and significance of R. solani anastomosis groups.

Earlier work at Harper Adams showed the potential of foliar fertilisers for dual purpose use as nutrients and disease control agents. These studies have been continued by exploring the possibility of using milk to control powdery mildew in wheat.

The nutrient nitrogen and strobilurin fungicides are both major controlling factors on the wheat canopy. Research at Harper Adams has shown that strobilurins may influence the uptake of soil nitrogen by wheat and affect nitrogen partitioning within the plant.

Fungi which grow on ripening wheat, such as Cladosporium, release spores around harvest time which can be allergenic to sensitive people leading to late summer asthma. The risk of high Cladosporium spore concentrations is being studied in relation to climate, in collaboration with the Midlands Asthma and Allergy Research Association and the Asthma and Allergy Clinic, Cardiff.

Molecular diagnostics allow the identification of pests and pathogens. These techniques are based on either nucleic acids (DNA or RNA) or antibodies. Such techniques are useful to identify and quantify pathogens that cannot be readily identified using traditional microbiology or when the pathogens occur as components within a disease complex. DNA-based assays are being used at Harper Adams to identify and quantify individual components of wheat disease complexes within various studies.  Messenger RNA-based studies have been used to quantify viability and monitor gene expression.