Sheep meat is characterised as having a high saturated fat content which is associated with obesity and cardiovascular disease in humans. In the UK, the majority of lambs are finished on grass which is associated with higher levels of the more beneficial polyunsaturated fatty acids (PUFAs) and anti-oxidants (vitamin E). However, a significant proportion of lambs fail to reach slaughter weight at grass and are finished on concentrates. Consumers tend to prefer grass to concentrate finished lamb. Grass finishing is associated with higher welfare, a shorter supply chain and higher eating quality. The Sheep Research Group at Harper Adams University has been investigating dietary strategies to produce concentrate finished lamb with the same eating characteristics as those finished on grass. Using appropriate raw materials and supplements, concentrate feeds can be formulated to produce lamb with a similar PUFA profile and vitamin content as those finished on grass. In addition, when offered to consumers in a consumer preference test, they were unable to detect difference in eating quality between grass and concentrate finished lamb. This work formed the basis of a PhD project and has recently been published at the British Society of Animal Science annual meeting.

Vitamin E is the main antioxidant in animal diets and adequate levels are required to prevent deficiency. However, recent evidence suggest that supra-nutritional levels may enhance lamb birth weight and neonatal lamb vigour. However, the mechanism is poorly understood. In addition, UK feeding standards are out of date and current dietary recommendation are lower than those used in other parts of the world. The most up to date feeding standard (NRC, 2007) suggests that a plasma vitamin E concentration of >2.0 ug/ml is required to prevent symptoms of deficiency and that this can be achieved with a vitamin E intake of 5.6 mg/kg live weight. However, vitamin E requirements may vary depending of the animal’s physiological state and the type of diet offered. For example, the vitamin E requirement of lactating ewes may be higher than that of pregnant ewes and vitamin E may be more available from forage than concentrate based diets. The Sheep Research Group at Harper Adams has been investigating factors that might be responsible for the supra-nutritional response and factors affecting vitamin E requirements. The results suggest that supra-nutritional levels of vitamin E may increase lamb birth weight by increasing placental size and efficiency. In addition, the vitamin E requirement to maintain a plasma vitamin E concentration >2.0 ug/ml is significantly higher during lactation than during pregnancy and higher than current U.K. recommendations. This work formed the basis of a PhD project and has recently been published at the British Society of Animal Science Annual Meeting.

With increasing concern about antibiotic resistance and the introduction of the EU ban on use of antibiotics as growth promoting agents in animal diets, there has been increasing interest in the use of plant extracts, probiotics and prebiotics as possible alternatives. To date, most of the research in this area has been conducted in pigs and poultry with variable results. However, limited work being conducted in ruminants, particularly sheep. Over the last few years, the Sheep Research Group at Harper Adams University have conducted a number of studies to investigate the response of pregnant and lactating ewes to plant extracts and prebiotics with some positive results in relation to colostrum and milk component yields. The results have been published at the British Society of Animal Science Annual Meeting and as reports to sponsors.

Since the EU ban on the use of antibiotics as growth promoting agents in animal feeds in 2006 there has been increased interest in the use of prebiotics as possible alternatives. Prebiotics are defined as ‘non-digestible feed ingredients that beneficially effect the host by selectively stimulating the growth of one, or a limited number of microbes in the gut’. Mannan-oligosaccharides (MOS) are commercially available pre-biotics which has been shown to enhance health and performance in a variety of species. However, limited work has been conducted with ruminants. The objective of the study was to investigate the effect of dietary inclusion of MOS on the performance of ewes and lambs. Forty-eight twin bearing ewes were allocated to either a control diet or one containing MOS, with ewe and lamb performance being monitored from 6 weeks pre-lambing to 8 weeks post-lambing. Blood samples were obtained from some of the animals to assess the effect of treatment on ewe metabolic status, and all ewes were injected with oxytocin to encourage milk let down to facilitate measurement of colostrum and milk yield. The results will be used to assess the efficacy of prebiotics in sheep diets. 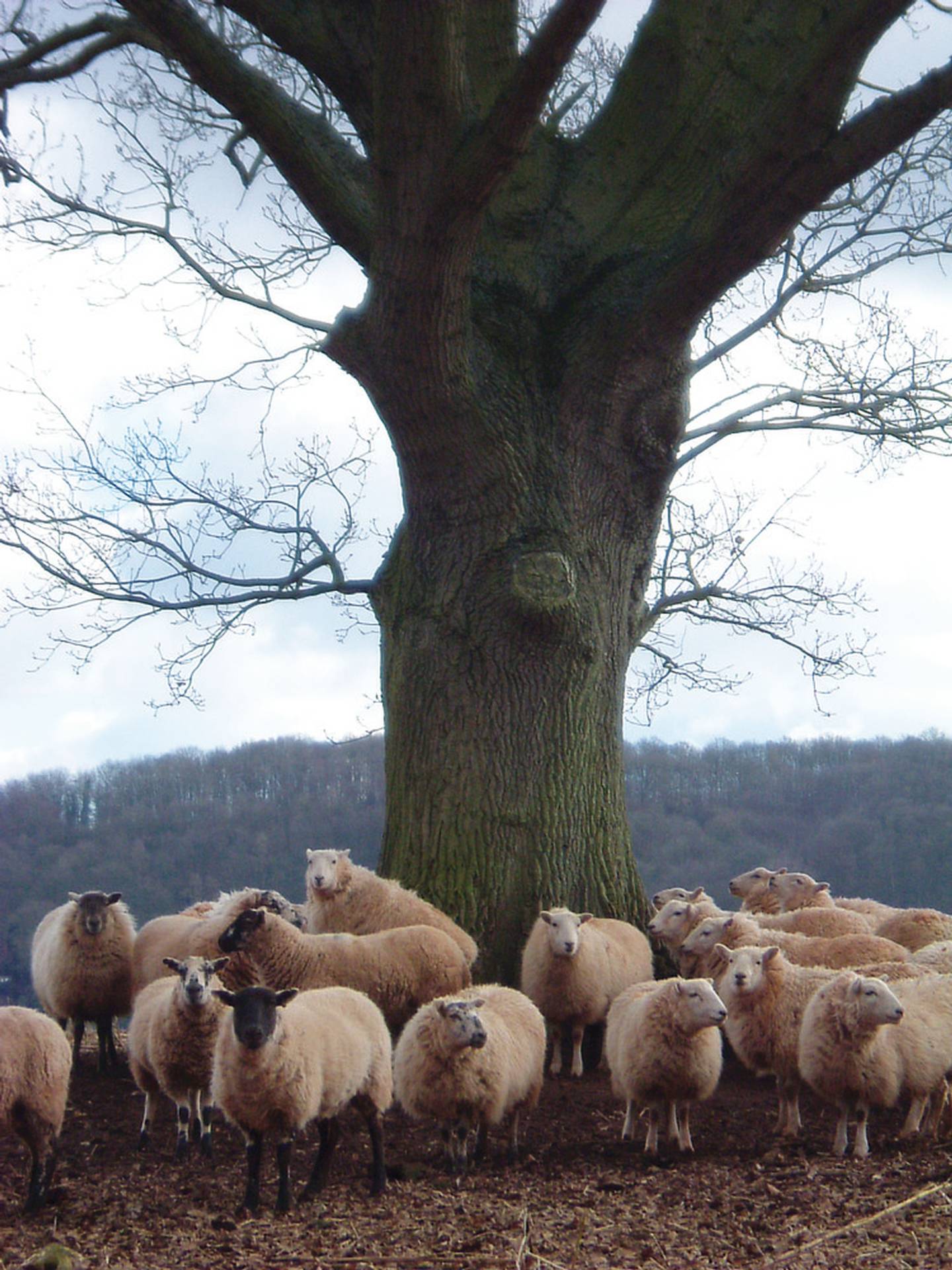 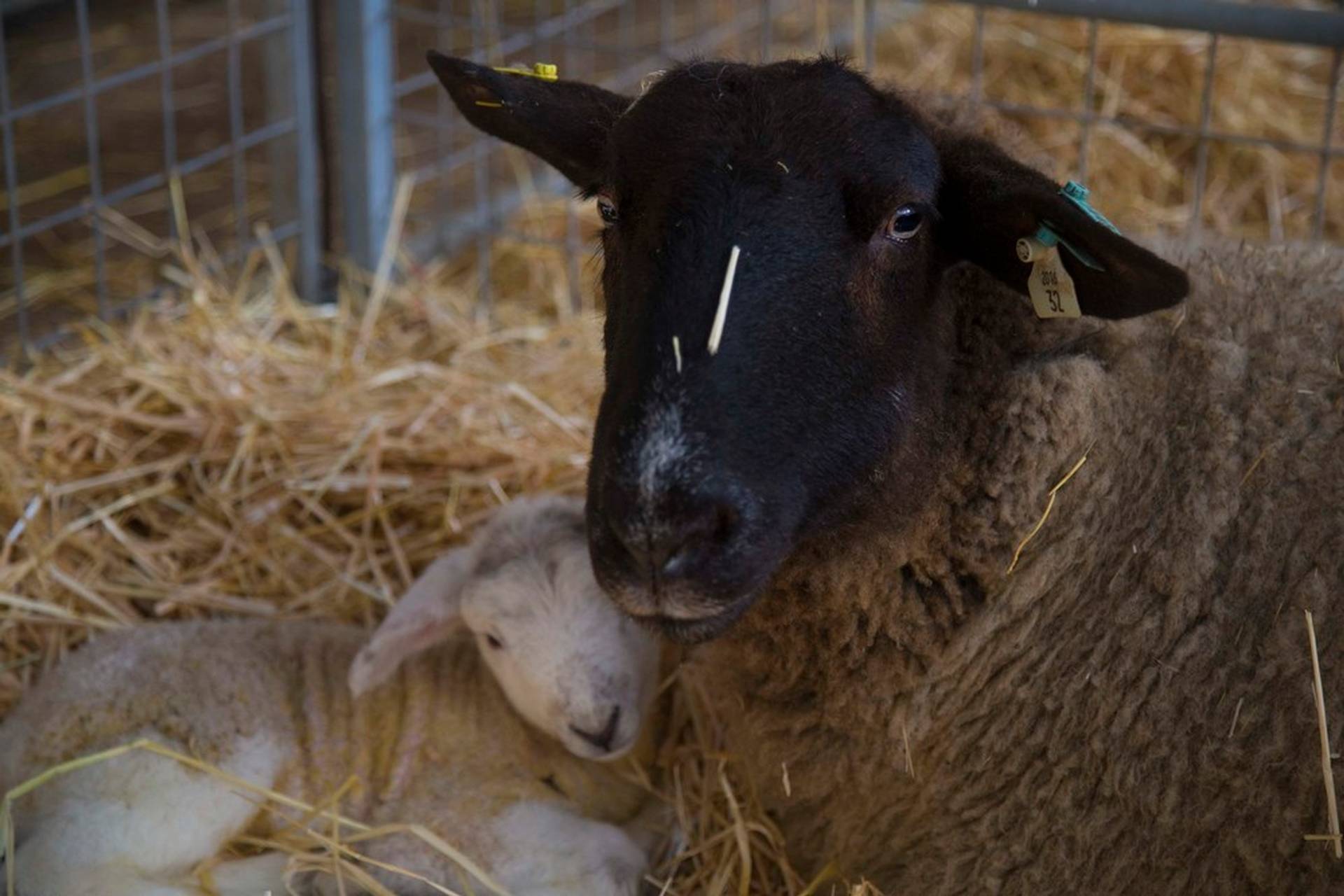 Plant based pig feeds contain significant quantities of phosphorus, essential for animal health and performance, but which is locked-up in phytic acid and associated phytate salts. Since the 1990’s, phytase enzymes have been added to non-ruminant feeds to enhance phytate digestibility. Recent evidence suggests that feeding super doses of phytase increases growth performance beyond that attributable to phosphorus release alone. In the UK, therapeutic levels of zinc oxide are often prescribed to prevent and treat post-weaning diarrhoea in newly weaned pigs, though some evidence suggests zinc may reduce the phosphorus releasing efficacy of phytase. Researchers at Harper Adams University have been working with phytase and pharmaceutical zinc oxide to improve the efficiency of pig production, reducing environmental pollution and maximising the use of non-renewable resources to help contribute to a sustainable and secure global food chain. The research showed that the optimal level of phytase for weaner pigs is 2000 - 8000 FTU/kg feed for two weeks post-weaning; reducing to 1000 FTU/kg in the third week post-weaning to facilitate bone mineralisation. The results have been used by industry to formulate diets for pigs and published at various international scientific meetings including the British Society of Animal Science (UK), Global Science and Technology Forum (Singapore) and at the Sustainable Pig Production Workshop (Thailand). 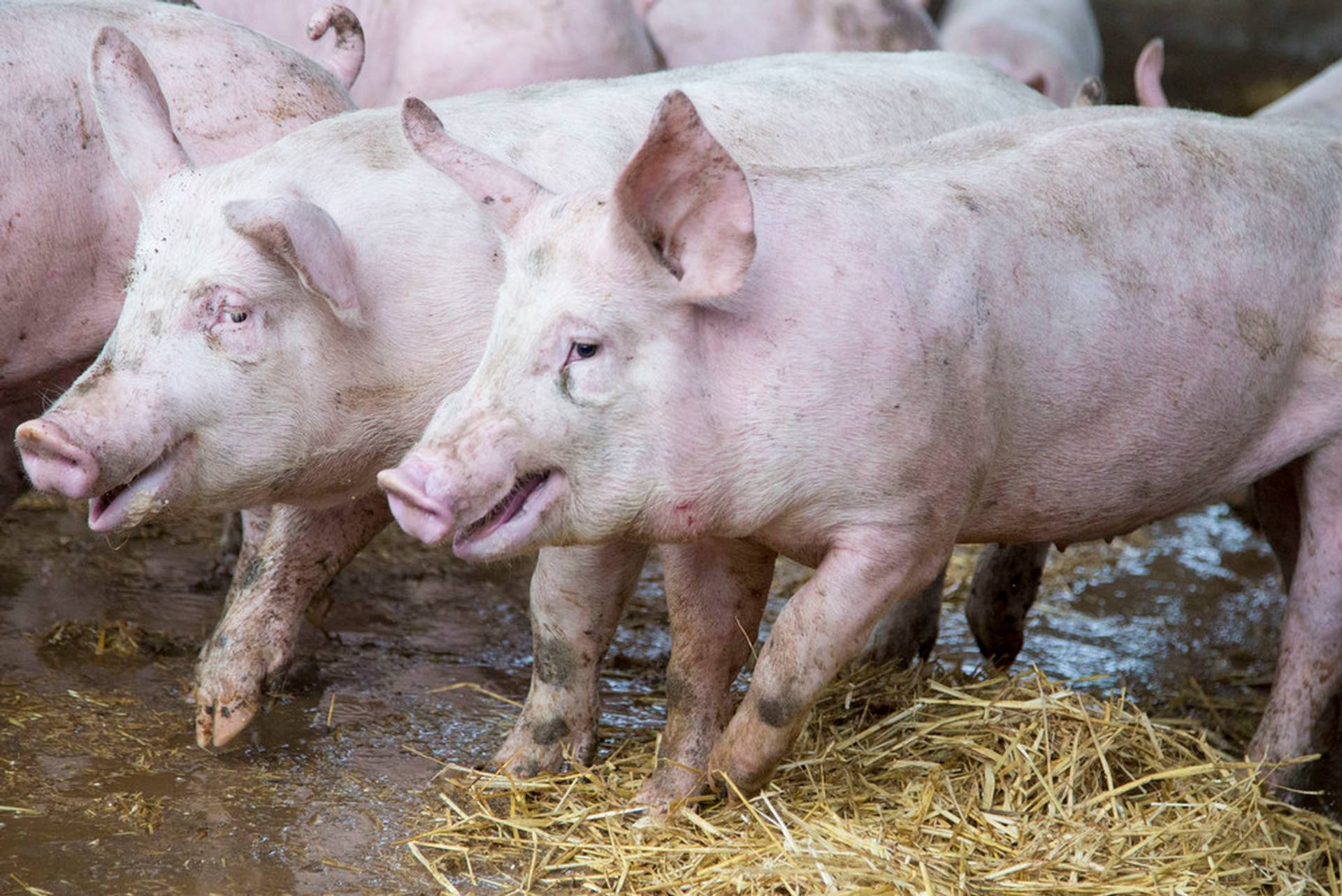 Milk and cheese are key components of a healthy human diet but are often criticised for being high in saturated fats and low in polyunsaturated fats, particularly the very long chain omega-3 polyunsaturated fatty acids. These longer chain fatty acids are mainly found in oily fish and, when consumed by humans, are associated with a reduction in the risk of coronary heart disease, lower blood cholesterol levels and reduced inflammation. A research team at Harper Adams University have been investigating ways to increase the content of these long chain, omega-3 fatty acids in milk and cheese by feeding cows microalgae, a feed source that is naturally rich in these fatty acids. Milk and cheese made from cows fed microalgae had increased amounts of the healthy fatty acids which would make a substantial contribution to the recommended daily intake guidelines. This improvement was achieved without any negative effect on the sensory attributes or taste of the cheese. Cows fed the diets containing microalgae also had changes in blood markers for inflammation and reproductive hormones which may improve their health and fertility. The results have been published in the Journal of Dairy Science and the Journal of Dairy Research in 2019 and 2020.

Research was undertaken to investigate the effect of feeding less protein to dairy cows to reduce the environmental impact of milk production and decrease the reliance of farms on soya bean meal. The cows were fed diets based on red clover, as this is a home-grown forage legume that can be used to replace purchased protein feeds. The diets contained different protein levels and were fed for 14 weeks to assess the effects on intake, milk production, weight change, health and metabolism. All of the urine and faeces was collected from some of the cows to assess the efficiency of protein use. The results showed that reducing the dietary protein level from 17.5% to 15% did not affect milk yield, health or weight change, but reduced purchased feed costs. Importantly, the loss of nitrogen in urine was lowered by 38%, reducing the environmental impact of milk production.

The number of dairy cows used in procedures was 55. Some of these were blood sampled to provide us with a better understanding of the effect of the diets on the cows’ health and metabolism. Some were held in stalls for a few days so we could accurately collect their urine and faecal output. Some were used to provide samples of their rumen digesta (first stomach) to allow a better understanding of the effects of low protein diets on digestion. 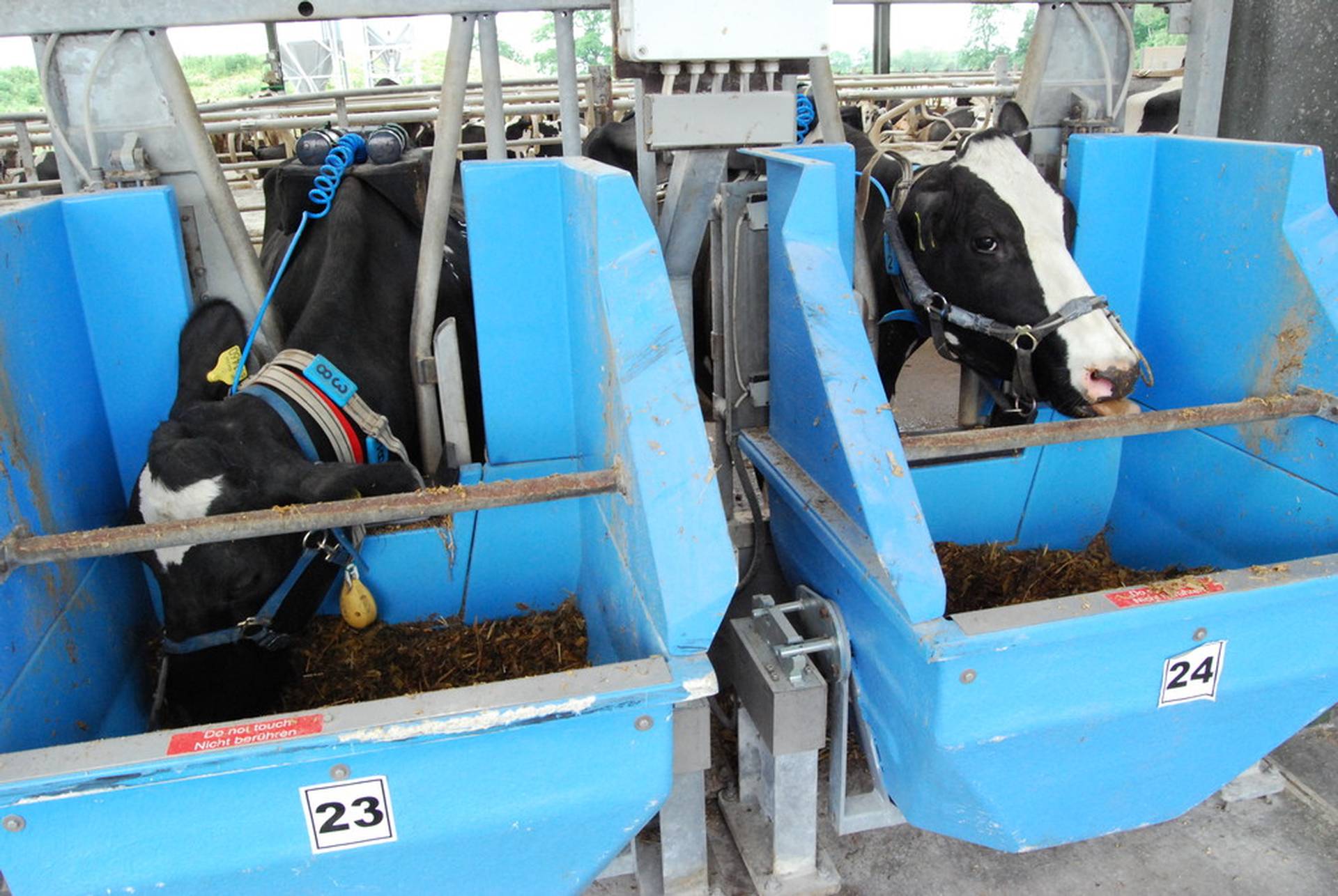