Increasing cultivation of Oilseed Rape has led to shorter rotations, with crops now commonly grown at intervals of 4yrs or less. As rotations have decreased, OSR yields have failed to rise, despite advances in crop breeding and management. One reason is thought to be the build-up of soil borne pathogens, in particularly fungi and nematodes. Separately these organisms are able to cause yield losses, however the formation of synergetic disease complexes, may significantly increase this. Thus, this project aims to attain the occurrence of such pathogens, and elucidate their role in disease complexes and yield decline within OSR.

Oilseed rape (OSR, Brassica napus L.) is a globally important crop, cultivated for its oil rich seeds, which are used in a wide range of applications. Within the UK, the planting area has increased dramatically since its introduction to the UK within the 1960s from 600ha to over 737,000ha in 2012. However yields of the crop have remained static since the 1960s with 3.4t/ha being the current UK average. This is much lower than the genetic potential of today’s varieties, with sources citing 6.4t/ha as being possible through the improved breeding of current varieties. This loss in potential yield, or yield decline, is thought be associated with the build-up of soil-borne pathogens, particularly nematodes and fungi, within intensive rotations.

The ability of fungi and nematodes to form disease complexes have been previously reported on crops such as; potato (Globodera-Verticillium; Pratylenchus-Verticillium; Globodera-Rhizoctonia), cotton (Meloidogyne-Fusarium) and a range of other crop species but few, if any, have been recorded on OSR. Recent survey work has reported that cyst nematodes are commonly associated with OSR, along with several pathogen species, which have been found associated with high intensity rotations. The hypothesis will be tested that these pathogens form disease complexes when present together and at suitable densities within a field.

The project aims to investigate the UK occurrence of a single species of nematode, along with six common soil borne pathogens. Previous crop samples were supplied by industrial partners from major arable areas of the UK, under a separate Harper Adams project, during the 2011-2012 growing season. Quantitative Real-Time Polymerase Chain Reaction (qPCR), will be performed on the samples with species specific assays being used to differentiate and quantify pathogen levels within crops. From this the most commonly found pathogens will be taken forward and used to investigate the formation of complexes, using glasshouse and field experiments to determine the effects these have on crop growth and yield.  Further research may be conducted on the epidemiology and formation process of disease complexes under field conditions.

Using these methods it is envisaged that it will be possible to advance the knowledge on how, when and why disease complexes form; along with their role in the yield decline of OSR. Thus, through this understanding, further research may be conducted to investigate suitable methods for the management of this phenomenon, improving agricultural production and efficiency 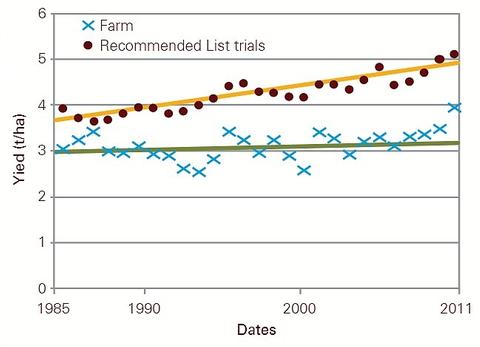 Dr Matthew Back
Director of Study