We spent Friday continuing the course of lectures, which we started with Chinese culture, which involved studying the variety of different cuisines and how they differed from what we are used to. Following that we had Chinese conversation, we learnt keywords and phrases for the sightseeing we’d be doing the next day. To finish off the day, we then learnt to cook some of the food which we had learnt about earlier on in the day.

We experienced traditional Chinese dumplings that night by learning how to order them via ‘WeChat’, which is one of the most popular apps used here.

On Saturday, we visited the Tiananmen square and the Forbidden City, which is a very popular tourist attraction in Beijing due to the ancient architecture and significant amount of history surrounding the area. However, we felt like true tourists due to the vast amount of people viewing the city and the 38 degrees heat.

Then after lunch, of local Chinese cuisine in an air-conditioned eatery, we headed over to the Olympic park to explore. Some of the group headed up to the Olympic Tower and enjoyed looking around the views, and different provinces of Beijing, while the others explored the park from ground level before meeting up again to head back to the hotel to relax in the evening.

Sunday was another day of sightseeing. We started with the Great Wall of China which lead to a great feeling of satisfaction when we all made it to the top and were rewarded with some breath-taking views.

We had lunch from one of the three uni canteens and then headed to Silk Street for some serious shopping and bartering practice; the purchases included tailored suits, high-end bags and designer clothing. The week ended on a cultural culinary experience; Beijing duck. We had two whole ducks which were served and carved in front of us and then eaten with a variety of accompaniments, the entire feast was exquisite.

Monday started with another lecture on Chinese culture which covered festivals. It was fascinating to learn about the stories behind each one, and the lesson ended with a tutorial of traditional paper cutting. After this, we visited the Ming Dynasty tombs. 13 of the 16 Ming emperors are buried there along with their wives, mothers and precious belongings, in stunning scenery and underground palaces. Then in the evening, we had a group football watching session to socialise with our buddies in a less academic environment.

Tuesday, we were back in the classroom with a full day of lectures. In conversation, we discussed family terms, numbers and how to tell the date. Then we gave presentations on our understanding of culture and the things that interested us about China; the most interesting was Jonathan's on the Great Wall's architecture and history. After this, we attempted a tai chi class, fully taught in Chinese. We then rewarded ourselves for our work out with ice-cream (naturally). 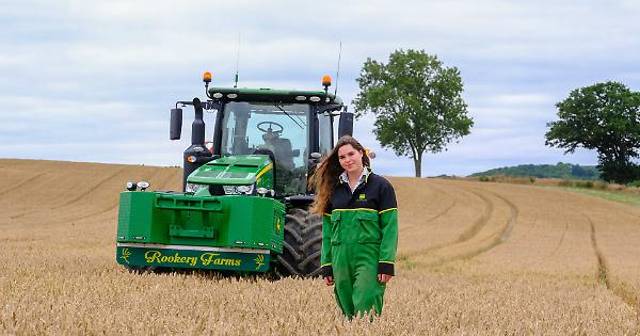 The Berkshire Farm Girl at Harper Even before starting her degree journey with Harper Adams, Eleanor Gilbert has been sharing her passion for agriculture with the world. Unde … Read More → Posted Yesterday
Technology shaping the future of agriculture: Meet Ollie Dudgeon Ollie Dudgeon is in his third year studying FdSc Agriculture with Mechanisation, learning about the connections between engineering and the … Read More → Posted 20 November
Overcoming challenges for student success! From a student’s first day on campus to the day they graduate, the experiences they gain help them to develop and grow academically an … Read More → Posted 18 November