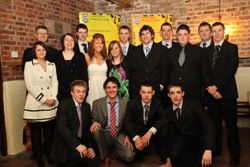 Students past, present and future from all across the Island of Ireland celebrated together at an annual Harper Adams University College event on Friday.

The Harper Ireland dinner, organised by student association of the same name from the University College in Shropshire, England, was held at the stunning Madeley Court Hotel, Telford.

It was a chance to celebrate the achievements of the previous year and to look ahead, welcoming both the new Harper Ireland committee and prospective students who had flown across to get a taste of life at Harper Adams, which specialises in higher education for the rural and land-based sector.

Guests were welcomed by outgoing Harper Ireland Chairman Des Connolly who handed over to the association’s new President, and the new Principal of Harper Adams University College since September 2009, Dr David Llewellyn.

Dr Llewellyn introduced the evening’s guest speaker, David McEIrea. He said: “David McElrea is a former student, which is marvellous. He’s done all sorts of things in his career after graduating from the University College in 2001 with a BSc in Agriculture with Farm Management and he is now working a 270 acre potato and cereals farm in West Tyrone. He was a Nuffield Scholar in 2004, studying opportunities for UK agriculture presented by the waste management industry, with which he travelled the world.

“He now has his own sustainable energy businesses, employing six people and with an annual turnover of about £5million. But he has also been active out there on the circuit, representing farming in UK research and development groups. He is chairman of the Ulster Farmers’ Union Rural Enterprise Committee and a founding chairman of Strabane Farmers Forum – a very worthwhile speaker who represents a widely enterprising set of activities.”

Mr McElrea spoke of his Harper Adams experience, from arriving as a naive 18-year-old, to being night manager of the student bar, to gaining his degree. He had three key messages for the current and future students: “Nothing is ever a problem; it’s an opportunity in disguise. Use your contact base – and the Harper name. If it’s not you, it’s going to be somebody else.”

He explained how he had applied all three to get to where he is today, dishing out particular praise to Mr Basil Bayne, secretary of the Harper Adams in Ireland past students association, who used his connections to help Mr McElrea travel abroad during his Harper Adams placement year.

Mr McElrea added: “To the prospective students, I would have to this how good a place Harper Adams has been for me to come to. When I came here, I was a very green, naïve 18-year-old. I see how much my life has changed over the last 13/14 years to where I am now – so I am definitely steering you in this direction. To the current students, one of the best things you have all done is come here. When you graduate, you will go back and be leaders in your field.”

After Mr McElrea’s lively speech concluded to rapturous applause, Des Connolly handed over to new 2010/11 Chairman Stephen McKean who gave thanks to everyone who has supported the club and made the evening a success.

Stephen oversaw the presentation of two awards. Firstly the chairman’s cup went to Niamh Molloy. A first year student, Niamh has just become secretary of the club, but has been a very active member since day one in Shropshire. The President’s Cup was presented to 21-year-old Agriculture with Mechanisation degree student Louis MacAulay, from Navan, Co Meath.

Gifts were presented to Dr Llewellyn and his wife, Noelle,  as well as Janet Fordham, Harper’s Student Union Finance Officer, who is affectionately know as “mummy Jan” and who, according to Des “is the backbone of the Harper Adams Students’ Union”.

Special thanks were given to Dunbia, after the company provided generous sponsorship for the Harper Ireland 2010/11 rugby shirts. A framed photograph of club members sporting their tops was presented to Dunbia representatives Ashley Stewart and Patricia Smith, who were top table guests in recognition of their generosity.

The committee members also took the opportunity to present three new scholarships, funded by Harper Ireland, which raises funds by planning and hosting the annual Paddy’s Ball at Harper, which this year takes place on Friday March 19.

The first year scholarship went to Matthew Hutchinson, 19, from Cookstown, Co Tyrone, who is studying Agricultural Engineering.  The second year scholarship went to Animal Health and Welfare student Jen Matthews, 21, from Kilkenny, and the final year award to Jesse Deverell, 21, from Geashill, Co Offaly, who will this summer complete his degree in Agriculture. There is no third year award because all Harper Adams students complete a work placement year as part of their degrees, so earn a salary during the third year.

Finally, before attention moved away from the tables and on to the dance floor, Basil Bayne said he looked forward to welcoming students past, present and future, and friends, to the annual Harper Adams in Ireland dinner, being held on September 11, 2010, in the Killyhevlin Hotel, Enniskillen.

Mr Bayne also spoke of the industry scholarships secured through Harper Adams in Ireland. One of these comes from Devenish Nutrition, and representatives Dr Deborah Cross and Dr Marian Scott had travelled to Shropshire to be at the dinner and present this award to Niamh Molloy on the night.

During the day, the Devenish and Dunbia representatives, Mr McElrea, plus 12 prospective students, had enjoyed tours of the Harper Adams campus, talks about Harper life, and lunch alongside existing students and staff.

Watch the video to see highlights from the evening (Note large file size). 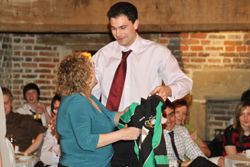 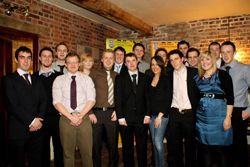 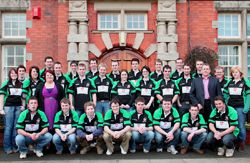 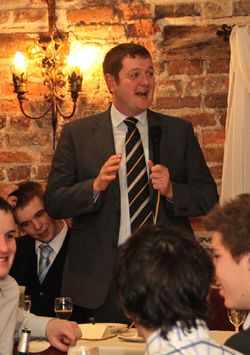