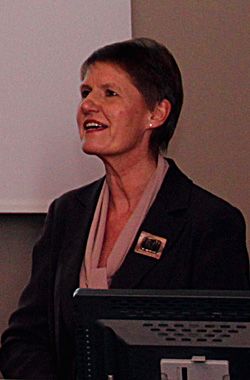 On February 22, Harper Adams was visited by Dr Christianne Glossop, Chief Veterinary Officer for Wales, who was introduced to the university College’s work and shown around the campus.

Dr Glossop presented the Aspire Placement Awards over lunch, and then gave a talk to a full RFA lecture theatre audience.

Harper Adams Principal Dr David Llewellyn said: “The talk, on responsibilities for animal health and welfare was thought provoking and prompted a number of questions and much after-lecture discussion about the approach taken towards this issue.”

During the questions Dr Glossop was asked what was being done in Wales to celebrate ‘the good farmers who were demonstrating best practice in animal welfare’ and she undertook to take this point back to the Welsh Assembly to explore the issue further.