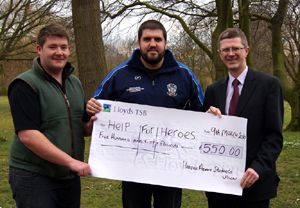 The University College’s Sports and Societies Coordinator, Ben Harper, said he had received a lot of positive feedback on the day, with people were saying how good the set up was at Doveridge and how challenging the targets were.

Field Sports Society Chairman James Irving said: “I am delighted how the day went and with the amount raised for such a good cause.” James also serves as an Army Cadet Instructor, at Newport, whilst he is studying at Harper, so the Help for Heroes cause is important to him.

The results for the competition were as follows:

Team trophies were won by:

Special thanks are due to all involved and especially to Doveridge for hosting the event, and for making a generous donation towards the total raised.