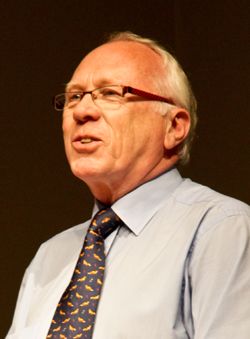 The top priority of the Food Standards Agency (FSA) is keeping the consumer safe, an audience at Harper Adams University College heard this week.

There was standing room only when FSA Chairman Lord Rooker, who took up the role last year, explained the workings of the ten-year-old agency to staff, students and guests in the West Midlands Regional Food Academy (RFA).

“The FSA is not a quango [quasi-autonomous non-governmental organisation]. It is a fully-fledged Government department but is non-ministerial. There is no minister in charge, but we answer to Parliament through the Department of Health. But really they are just our post box. Health ministers have no control over the day-to-day operation and regulation of the FSA. They cannot order us to do anything. They can ask us to do work for them, but in terms of direction and control, it’s not ministers doing it.  And that is key to the FSA’s success. We can put the consumer first, be open and transparent and, above all, only make decisions based on evidence.”

He explained that all FSA policy decisions are taken in open board meetings, which are broadcast live on the internet, with members of the public able to watch and submit questions which are answered before each live session finishes. With all food incidents recorded and in the open, they are no longer reported in the crisis fashion they were in the 1980s and 1990s. This was just as well given that the UK has an average of 30 food incidents each week, Lord Rooker added.

“Our top priority is food safety. There are 500 deaths from food-based diseases every year and a lot of that is caused by what people do in their own homes. Manufacturers can do everything to make their products safe, but when they get home, into the kitchen, what people then do is amazing. There is still this issue, this tragic loss of life, and we have a strategic plan to try to sort that out.

“We are here to help and to regulate. Above all, our raison d’etre is not the Government, not ministers, but the consumer.” To see the FSA board webcasts or get food safety advice, visit: www.food.gov.uk

Following a tour of the academy, during which he was accompanied by the Principal of Harper Adams University College, Dr David Llewellyn, and RFA manager, Martin Anderson, Lord Rooker said: “The Regional Food Academy is excellent. It really is tip-top and I am very pleased I have had the opportunity to see it. The facilities are first class and it’s clear that it’s already doing a lot of good work.” The RFA provides technical and business support to food and drink businesses.

Lord Rooker added: “West Midlands specialist foods have been overlooked in the past but the region has a lot to offer and the academy will be a great help. The academy’s support for smaller food and drink companies is especially important in promoting innovation.”

Dr Llewellyn welcomed Lord Rooker’s visit, saying: “Everything we teach and research at Harper Adams links into the food chain and getting quality, safe-to-eat produce from farm to fork. So it is important for our students to learn about the role of the FSA and how its regulatory framework is put into place. I am sure that the issues raised during Lord Rooker’s lecture and the subsequent question and answer session gave everyone a helpful insight into the priorities for food safety within the UK, and some of the issues the Agency will be addressing in the next two to three years.”