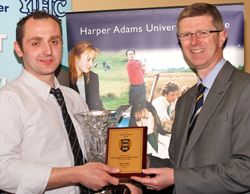 The prize, a cut glass Tyrone crystal vase inscribed with the name of the University College and its crest, will be awarded annually to the best club leader.

The first winner was Martyn Blair, leader of Finvoy YFC, who also received a plaque which he will be able to keep.