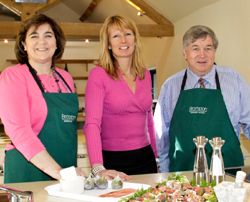 More than 30 years after the national movement began, Shropshire finally has its own branch of the Women’s Food and Farming Union – thanks in no small part to a man!

Ralph Early, Director of the West Midlands Regional Food Academy (RFA), was so keen to make sure Shropshire women can enjoy the benefits of union membership that he offered to not only base the local branch in the academy, at Harper Adams University College, near Newport, but also to act as the new group’s secretary until it gets off the ground.

Mr Early, who is also Head of Food at Harper Adams, was the guest speaker at a Shropshire WFU launch event held at the new Brompton Cookery School, near Shrewsbury, where potential branch members also enjoyed a “How to Impress Your Guests” cookery demonstration by food writer Melissa Rees.

“So when they get together they make things happen, as has been the case where there are WFU groups in other areas. That’s why I think this group is going to make a big difference here in Shropshire. The Regional Food Academy and the Women’s Food and Farming Union share they same core aim of promoting regional food and supporting local food producers so it is natural that we should work together.

“The RFA can offer the union expertise and access to a wider professional network that will support their work. Ultimately, we hope this will lead to more high quality food produced and sourced locally, more jobs for the West Midlands and a boost for the local economy.”

Gail Thorneycroft Holmes, Chairman of the Staffordshire Women’s Food and Farming Union, added: “In a county like Shropshire which has growing reputation for food production, there is so much that can be done. Being based at the Regional Food Academy will give the union a major boost in terms of profile, know-how and funding we can tap into.”

Brompton Cookery School Director Philippa Holme said: “Farmers' wives are very supportive of agriculture and are on call 24/7 for their farming businesses. Harnessing their energy and know-how in Shropshire, which is now marketing itself as the Country of a Thousand Flavours, can only have a major benefit.”

The newly formed Shropshire branch will hold monthly meetings at the West Midlands Regional Food Academy, Harper Adams University College, Edgmond, Shropshire. The first, to include a tour of the academy, will take place on Monday June 21, at 7.30pm and thereafter on the most suitable evening and time elected by the newly formed membership. For more information contact: Ralph Early on 01952 815365 or e-mail rearly@harper-adams.ac.uk

The national Women’s Food and Farming Union was founded in 1979 and has branches across the UK. It is a voluntary organisation committed to promoting an understanding of quality British produce.

Harper Adams already supports rural businesswomen through the Women in Rural Enterprise (WiRE) initiative, which was borne out of research conducted at the University College.  WiRE recently held its 10th anniversary conference at the Edgmond campus.