A week of celebrations for students 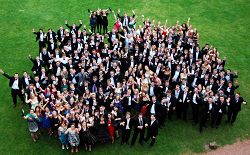 It’s almost exam time at Harper Adams – but the students wouldn’t let the final slog begin without letting their collective hair down first!

Last week was filled with celebrations – with course dinners on the campus and the Final Year Dinner at the impressive Peckforton Castle in Cheshire.

Speakers at the course dinners, which included one with a Wind in the Willows “Banquet at Toad Hall theme”, were Stephen Vickers, of Buccleuch Estates, and farmer/TV presenter Adam Henson. (see video for an interview)

At the final year dinner, students enjoyed Champagne on arrival before a three-course meal, followed by an evening of dancing and awards.

William Weaver, 21, from Gloucestershire helped to organise the event with fellow student Emily Stevenson. He said: “We wanted to make this event a night to remember so chose Peckforton Castle because it is a fantastic location.

“Everyone has worked so hard during the past four years so it’s really great to see everyone enjoying themselves and congratulating each other on their success.” 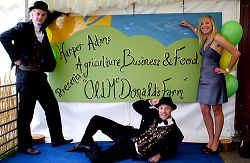