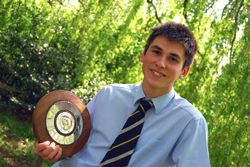 A Harper Adams graduate has been presented with an award that recognises the quality of his final year dissertation project.

Rhys Morgan, from St. Clears in West Wales, received the Johnson New Holland Trophy Award at the annual National Institution of Agricultural Engineers (IAgrE) conference held at Cranfield University. The award is to encourage and recognise innovation by Agricultural Engineering students throughout the United Kingdom.

Rhys, who studied a BEng (Hons) degree in Off Road Vehicle Design at the University College received an ‘A’ grade for his dissertation entitled: “The design and development of an automatic park brake for the JCB 7000 series Fastrac.”

The 23-year-old said: “This was a project that led on from my placement year at JCB and involved me creating a system that automatically applies and releases a handbrake using a set of sensors and a computer algorithm to decide on the operator’s intent.

“It’s great to see that industry professionals are recognising my work and the efforts that went into gaining my degree. I feel honoured to bring the award back to Harper Adams.”

Rhys is currently working on the family farm after spending seven months working for Graeme Bagrie Contracts Ltd, an agricultural contractor in New Zealand. He is now preparing to commence his job as a Development Engineer at JCB later this month.

David White, Senior Lecturer in engineering, nominated Rhys for the award. He said: “I am delighted that Rhys has won this award as he was a pleasure to supervise, very hard working and conscientious.

“I nominated his dissertation because it clearly forfilled the requirement of the Johnson New Holland criteria, being a project with prospect of commercial exploitation.

“Rhys’s system allows a Fastrac to be held stationary and then drive away smoothly without the driver needing to manually apply or release the parking brake. This can be particularly useful when moving slowly and stopping frequently in heavy traffic and also when performing a hill start.

“I wish him well in his future career.”