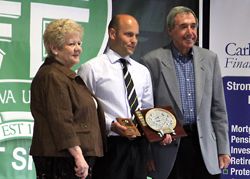 Harper Adams is delighted to have welcomed 1966 England World Cup-winning goalkeeper Gordon Banks to its campus.

The footballing legend was at the University College at the invitation of Newport’s Nova United Junior Football Club, for its annual prizegiving.

Harper Adams supports the club by providing pitches for regular training sessions and its Queen Mother Hall for the prizegiving, for which Chairman Wayne Coombe gave thanks on the night.

Harper lecturer Sandy Mackenzie also supports the club by coaching the youngsters involved, and at the prizegiving his efforts were rewarded with the Eva Allen Award for Outstanding Contribution to Nova United JFC. The award was presented by Eva Allen and Gordon Banks.

Mr Banks, 72, shared tales of his career and determination to play football despite adversity with the assembled youngsters.

Nova United trains youngsters to play football from the age of 6 through to 18. Over 300 children attend Saturday morning training, with 13 teams playing competitive football on Sundays. The club is run entirely by volunteers (mainly parents), on a not-for-profit basis. 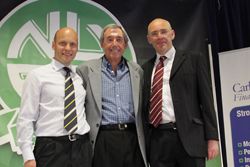