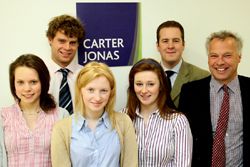 The winners have been announced in an annual sponsored award developed by leading property consultants Carter Jonas, for Harper Adams University College students.

The awards scheme, established by Andrew Black, an associate in the Shrewsbury branch of the firm, and a graduate of the BSc (Hons) REALM at Harper - provides students with a real life case study location and generous cash prizes for the three who produce the best work.

Mr Black, said: “This really is an exciting project and will help to forge strong relations between Harper Adams and Carter Jonas.

“The students studying on the REALM course are the lifeblood of the surveying profession and we are delighted to be able to assist in the education to help them achieve their goals of becoming Chartered Surveyors."

This year’s project saw the students having to advise James Thompson, the owner of an estate in Hadnal, Shrewsbury, on the future of development of a large stable complex which is situated near a modern office complex.

The Realm /RPM and final year Foundation Realm students were asked to carry out a feasibility study on the empty office units, produce national and local marketing reports and a development appraisal for existing and future users.

The winner was Carys Williams, from Hanmer, 20, near Whitchurch, North Shropshire.
Carys said: “It is fantastic to have been awarded a prize for a piece of work. Carter Jonas has been very generous and I am thrilled to have been selected as their winner.

“I am now looking forward to getting the most I can out of my placement year, when I will be working for Halls in Shrewsbury, before returning to complete my Harper Adams degree.”

The runner up was Joffy Rose, 21, from Tealby, Market Rasen, Lincolnshire.
Joffy said: “Winning the Carter Jonas award for the report made the hard work worth while!

“My dream is to earn enough money through chartered surveying to buy my own farm – very ambitious in today’s market!”

The standard of work this year was so high that the judges decided to award joint third place to Susie Williamson, 21, from Chetwynd near Newport and Anne Strong, 24, from Llansaint, Carmarthenshire.

He added: “It was so good dealing with a live case and having the support of Carter Jonas during the whole project.”