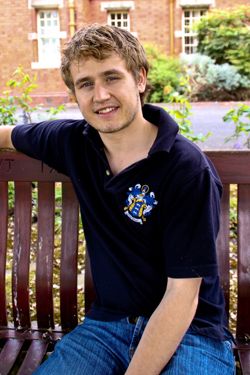 A Harper Adams student will be graduating with the knowledge he impressed the judges in a new national award which asks contestants to look to the future of pig and poultry farming.

Tom Martindale, who is coming to the end of his Agriculture and Marketing BSc (Hons) degree at the university college near Newport, was a runner up in the ABN (Associated British Nutrition) Innovation Award.

Contestants were asked to think of new ways to market British pig and poultry products and the 22-year-old, from Anna Valley, near Andover in Hampshire, was joint runner-up.

Tom had to submit a written proposal, based on which he was chosen as one of three finalists in the national contest. He was then asked to come up with a presentation to take before a panel of judges at the recent Pig and Poultry Fair.

Tom, a former student of the Peter Symonds College in Winchester, said he had to deliver his presentation in front of four judges in the style of television show Dragon’s Den. He said: “It was really nerve-wracking and afterwards I had to do another presentation which Adam Henson, from TVs Countryfile, was facilitating.

“My idea was called ‘Sponsor a pig’ and was based around a consumer being able to purchase a pig after it’s been weaned and take them through the stages until it is butchered for their requirements. The consumer could also come to the farm and learn about British pig farming and agriculture.”

Tom said it was great experience to meet people in the industry and develop his ideas.
When he finishes his degree, he plans to return to his family’s free range pig farming and pork processing business, where he can put his skills and ideas to the test.

Tom added: “The judges said they could see my idea being implemented and said I was very enthusiastic and it was definitely one of the best things I have done this year.”