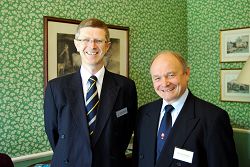 Lincolnshire-born Richard is currently the Managing Director of Cherry Valley Farms Limited, alongside being a Director of the BPC and EPB. He presented the report, “The World of Waterfowl” at the Farmers Club, London.

The report examines waterfowl production methods and welfare implications, as well as key worldwide meat markets and how the UK compares to these.

Although imports of cheaper duck meat from China could improve the price position of the product and spark a significant increase in consumption, this will be at the cost of jobs in the European industry.

Duck breeding companies will need to narrow the gap between duck and chicken in feed conversion terms if the product is to be able to compete for increasingly expensive cereals.

Richard concluded that there exists a real opportunity for the duck industry to expand in other areas of the world, particularly the Americas and Africa given the hardy nature of the bird and its ability to support rural populations in developing countries.

The Temperton Fellowship was established to commemorate the contribution of Dr Harold Temperton, Director of the National Institute of Poultry Husbandry at Harper Adams University College from 1951 to 1974.

It is financed by the accrued annual interest from the Temperton Trust investments, which are derived from contributions and donations, as well as proceeds from sales of the book – The History of the National Institute of Poultry Husbandry by ME Telford, PH Holroyd and RG Wells, published by Harper Adams University College, September 1986.