Graduates bike around the world for charity 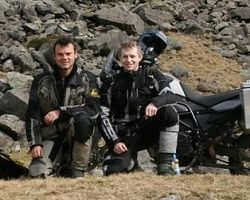 Two Harper Adams graduates are in the middle of biking around the world in a bid to raise money for Mongolian communities.

The route is expected to take approximately two and a half months to complete on their specially adapted motorbikes and will take them through arduous conditions and adverse weather.

Mike, aged 23 and Florian, aged 24, both graduated last September after studying for their degrees at Harper Adams University College, Shropshire.  It is during this time that they became inspired to visit Mongolia after hearing about the problems farmers out there are facing.

The pair chose to use BMW F800 GF adventure touring bikes, which cost around £8,000 each, and they are still hoping for additional sponsors to help cover this cost aside from donations. These are the same bikes that Charley Boorman and Ewan McGregor used in Long Way Round – a documentary series about a similar challenge.

Florian, who studied Agriculture with Crop Management said: “For me it’s very simple- seeing the world from a motorbike brings you a lot closer to the elements and people are much more approachable towards you rather than being hidden away in a large 4x4.  That’s what it’s about- meeting people and appreciating their customs along the way.”

Off Road Vehicle Design graduate Mike added: “I’m most looking forward to seeing Mongolia even though I have been warned that it will be the hardest because there are no roads and finding food is very difficult, but, it will be amazing to be there.”

The friends are due to complete their challenge in late August. Visit www.4aid2wheels.webs.com for more details and a link to their JustGiving page.