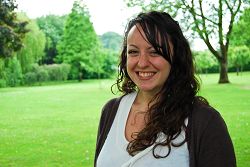 A final year student at Harper Adams University College has been investigating means of monitoring the effects of passive smoking in dogs as part of her dissertation.

Stephanie Driscoll from Rossendale in Lancashire has recently completed her project entitled: “Can SPO2 and ETCO2 be used to indicate levels of passive smoking in the canine during anaesthesia?”

The 22-year-old said: “I devised a questionnaire which was given to owners as their animal was admitted for an operation on the same day. This asked general health questions as well as three questions about the owner’s smoking habits.

“These were then used to compare the anaesthetic records using the SPO2 and ETCO2 readings to see if there was a difference between those exposed to smoking, and those not.”

SPO2 is a measurement of the amount of oxygen attached to the haemoglobin cells in the circulatory system, while ETCO2 is the concentration of CO2 at the end of an exhaled breath.

Steph, who is due to graduate in September with a BSc (Hons) in Veterinary Nursing with Practice Management, added: “I used three veterinary practices to trial the experiment and the results show that one of the practices found that these methods are good indicators. So in other words, passive smoking does affect the respiratory and circulatory systems in dogs.

“I’ve decided to continue my research for a year once I have graduated, with guidance from my tutor at Harper, because although people realise the effect of passive smoking on themselves and children, they rarely consider the effect on their pets.”

Steph is due to begin work as a Veterinary Nurse at the Haywood Veterinary Centre where she hopes she will be able to continue her experiment. She intends to investigate the differences between caged animals such as hamsters, and those that are able to move further away from the smoker, after noticing a significant difference between lap dogs and larger dogs.

She said: “Owners with lap dogs tend to smoke with the dog under their arm and this showed in my results. Public awareness is key, we need to increase the awareness of these results because passive smoking in companion animals is definitely something that needs to be considered.”

Watch the video to meet Steph.