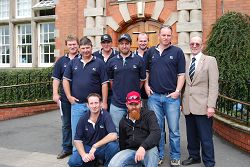 A group of Tasmanian farmers and agronomists visited Harper Adams last week to learn about precision farming as part of a two week UK tour.

In addition to attending presentations at the University College and a guided tour, Serve-Ag toured facilities in the local area, including Mr Walker's farm at High Ercall and Ironbridge.

David White, Senior Lecturer in Engineering said: “It was very interesting to hear of the problems they were facing, for example, the importation of peas from China, and how Tasmanian farmers are looking for ways to reduce costs whilst improving the efficiency of their operations”.

The group was led by Production Agronomist, Bruce Dixon (ex-Writtle and Silsoe College student) and consists of agronomists and farmers covering enterprises such as growing opium poppies, potatoes, vegetables, pyrethrum and wheat, as well as dairying.