Delegates learn about the future of bio-plastics 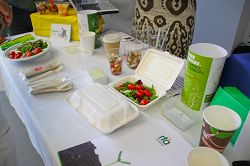 Top delegates from across the country have gathered at the Regional Food Academy based at Harper Adams University College in Shropshire to hear about why bio-plastics are the future in sustainable packaging.

Ralph Early, director of the West Midlands Regional Food Academy (RFA) introduced a range of experts throughout the daylong seminar, which was organised jointly by the RFA and the Polymer Innovation Network.

Martin Anderson, manager of the RFA who helped organise the conference, said: “It’s the first self organised conference, it’s on a subject of national concern and in the middle of recession. It’s been the best turn out we could hope for.

“It’s what the academy was designed for, to bring people together and share best practice and ideas.”

Mr Early said it was important to switch to bio-plastic packaging – made from organic compounds such as lactic acid using special chemistry techniques to create a plastic.

He said: “Oil and petroleum supplies used to make traditional forms of plastic are running out and this type of packaging is damaging to the environment.

“Bio-plastics can be composted and broken down. The oil-based plastics use the energy from the sun that was stored millions of years ago and as we use it we add to the greenhouse effect.”

Dr John Williams, Polymers and Materials Manager at the National Non-Food Crop Centre talked about bio-plastics as an alternative, their origins and the future.

He said big companies and supermarkets had a “false start” when at came to using bio-based products, but it was now picking up.

He added: “I think we have to re-educate consumers as to how plastics are useful and then we can start to explain the difference between plastics.” 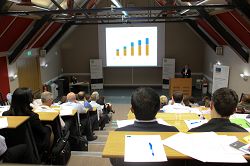 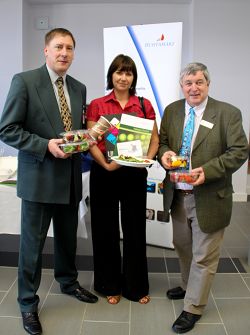