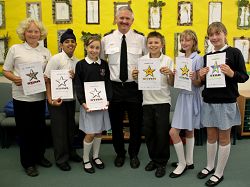 Shropshire primary school children have been learning about how to say no to drugs as part of a police project sponsored by Harper Adams University College.

Dave Hancocks, Newport Rural Local Police Officer, visited Year Six children at St Peter’s Primary School in Edgmond this week to teach them about the STAR project- Stop, Think, Act and Reflect - a West Mercia Police initiative set up between the Police and the education Authorities.

PC Hancocks has been going into schools in Edgmond, Lilleshall and Tibberton for the past 15 years delivering the West Mercia Police and education authority initiative to the final year primary children.

Harper Adams has printed up the work booklets that the children use for the scheme  since PC Hancocks started delivering the programme, and over the years the University College will have provided more than 1,300 booklets, which have formed an essential part of the children's learning.

The scheme is designed to give children knowledge of drugs, especially alcohol, cigarettes and solvents, as these are drugs they are mostly likely to get hold of. The children are taught about the dangers so they can make informed decisions about them.

It also includes teaching skills on assertiveness and consequences and gives the children skills to say no to things they do not want to do such as smoking and drinking with friends.

The teaching recognises the problems with peer pressure so gives them the skills to say no in such a way they can keep their friends but remain safe.

PC Hancocks, said: "Delivering STAR in junior schools is very rewarding. I aim the delivery at children about to leave junior school and move on to their secondary education where they will be open to a lot more adult influences.

“By talking to children in a very open way about the health dangers involved in taking drugs I am sure they learn an awful lot from the sessions.

“STAR is designed to give these young people 'life skills' to take with them into adulthood. The use of workbooks in the delivery of STAR is essential and I am grateful to Harper Adams for their support over the years in providing these for me."