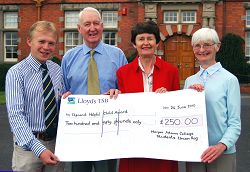 Students at Harper Adams University College have helped another local charity by donating £250 to the Helpful Child Award.

Over the past year the Students Union have raised thousands and picked a number of local charities to benefit from their fundraising activities.

The latest to receive a cheque was the Helpful Child Award which works with St Peters Church of England Primary School in Edgmond, near Newport.

Every year, people are asked to nominate children from the school who have shown a good public spirit and are helpful in the community.

These children receive book tokens as a reward and the overall winner gets a shield to keep and their name added onto the award shield. This year the winner was Fiona Croft, aged 10.

Chris Manley, Harper Adams Student Union President 09-10, said: “We want to give the money raised to local charities. We chose this one because the young people in the community are the future of the community and we want to recognise the good work that they do.

“Over the year the Raise and Give (RAG) team have held a range of events to raise money and we’ve had a lot of fun in the process.”

Diana Wright, Chair person of the Helpful Child Award, which has been going for five years, said: “We were down to our last £10 at the end of this year so it’s been tremendous to receive this money from the students at Harper Adams.

“It’s always a real surprise for the children. They don’t know they are getting a reward until it is announced in their assembly.”

Anyone who wants to donate to the Helpful Child Award or find out more about it can contact St Peters School on 01952 386 680.