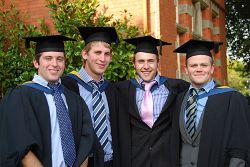 A former Harper Adams student has won two trophies at the Shropshire County Show where he exhibited his British Blue cows this weekend.

This weekend, he and his father who runs the family farm, exhibited their British Blues at the newly named Shropshire County Show (formerly the West Midlands Show)  in Shrewsbury.

Boomer, from Weston in Staffordshire, won first prize in the Breed’s Championship and the Inter-breed Championship.

His passion is for the British Blue, which is also represented on the family farm in the shape of his herd of ‘Boomer Blues’.

Boomer said: “My family has exhibited every year for the past 20 odd years and we and normally win something but these are the biggest prizes we have won and it’s a fantastic achievement.

“We also exhibited our cows at the Cheshire County Show last week where we won the same categories and we will be back exhibiting next year.”

As well as his success in the ring, Boomer has just landed his dream job as a Beef Specialist with UK cattle breeding company, Cogent.

Boomer’s appointment will reflect the company’s increased investment in the beef sector and a growing demand for their product.

He will concentrate on growing Cogent’s extensive beef stud and providing high quality genetics for this important sector. He will be closely involved with bull selection, developing the young sire progeny evaluation programme and advising farmers on beef products.

The 22-year-old said he didn’t expect to get a job of this standard so soon after graduating.
He said: “My job is fantastic. It’s a really good job and I think going to Harper Adams had a big influence on me getting it. It definitely stood me in good stead.”

Despite having only recently graduated from Harper Adams, Boomer has a string of successes to his credit, including the Stock judging and Handling Championships at the Royal Show in 2008 and Staffordshire YFC Junior Member of the Year in 2005. 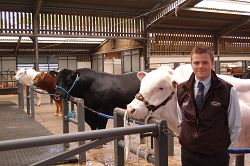