Farewell Chris as Pete steps up 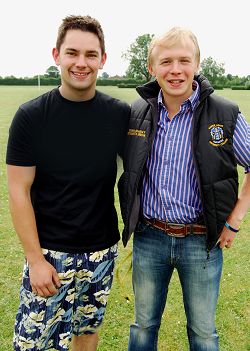 Another Harper Adams Student Union President is standing down and passing the baton to his eager successor.

Chris Manley, 25, has been in the post for the 2009/10 academic year and is making way for 23-year-old Pete Dodd who is about to graduate from a BEng in Agricultural Engineering.

Chris, from Cullompton, Devon, is leaving Harper Adams to take up a three month paid work experience placement at ABP (Anglo Beef Processors) after which he plans to do some travelling.

He said his year as the Student Union president at Harper Adams, in Shropshire, had been “absolutely fantastic” and a “rollercoaster ride”.

He said: “You have to learn really quickly but it’s great in terms of learning key skills and personal development and I think Pete will gain a lot from the experience.

“I’ve really enjoyed my time at Harper, it was the best decision I’ve ever made to come here and this year has been a great opportunity to give something back.”

Chris, who graduated last year with a 2:1 BSc (Hons) degree in Agriculture, said there had been some fantastic highlights over the last year. They included Fresher’s Week, community and charity work and the introduction of the Newcastle Agricultural Society versus Harper Adams sports fixture, which he hope will become an annual event.

He said: “We raised £15,000 this year and charity and community work has really come to light for me. I’ve always wanted us to improve in that area and I am really pleased we have been able to give so much to local causes.

“My advice to Pete is that the time flies by, so to make the most of it, set targets and ensure that you achieve them. Strive to get everyone in the union involved as much as possible but know that you can’t please everyone all the time – that is a really important lesson – but be positive and take other people’s opinions into account.”

Chris said that Pete was going to be “fantastic” in the role and that he had some “refreshing ideas” for the coming year.

Pete, who has been preparing since May when he was elected into the position, has already started working on his ideas for the year and promised that there were some “exciting things” in the pipeline.

He said: “Being at Harper for the past five years has changed me as a person for the better and I have absolutely loved it here. I am really excited about this position because, like Chris, it means I can give something back.

“I’m used to hard work because of the farming and mechanical work I do and I love to keep busy so I get personal achievement, but, I think this job will give me more confidence.

“I think Chris has done a really, really good job and has turned things around. I’d do well not to improve things because of the great foundations Chris has laid. I have some big shoes to fill and I will do my best to fill them.”