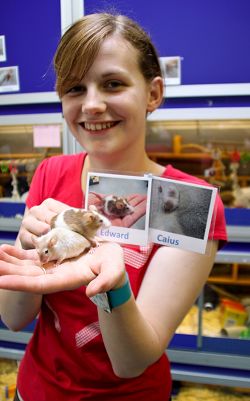 With Eclipse, the next instalment from the Twilight saga busy smashing box-office records, here at Harper Adams University College our 15 mice named after characters from the series are also thriving.

Louise Campbell-Kelly, a third year student at the Shropshire based University College, has been on a work placement in the Companion Animal House (CAH) this year.

It is her job to look after the animals which include rabbits, guinea-pigs, rats, hamsters, gerbils, chinchillas, snakes, lizards, frogs and more as well as mice.

Being a fan of the Twilight saga, which includes the Twilight, New Moon, Eclipse and Breaking Dawn books, three of which have now been made into blockbusting films, Louise decided to name most of the mice in her care after characters from the saga.

Eclipse, the third film in the series starring Robert Pattinson, Kristen Stuart and Taylor Lautner , tells the story of Bella - a girl caught between the love of a vampire (Edward) and a werewolf (Jacob).

It was officially released in the UK on Friday and is already smashing box-office records. The final film is yet to be made.

The new mice were added to the CAH in January and Louise, 21, from Stone in Staffordshire, decided to name 15 of the mice after Twilight saga characters including Edward, Bella, Victoria, Carlisle, Caius and Rosalie.

She said: “It’s my project and it helps if the animals’ names are based around a theme. It helps me and the other students recognise them.

“I did attempt to match them up with the characters they look like. For example, Victoria is a reddish colour and she is a redhead in the film. There are no mice in here named after Werewolves though because I only like the vampires!”

Louise, who is studying BSc (Hons) Animal Behaviour and Welfare, has named the guinea-pigs after flowers, the rats after characters from the BBC soap Eastenders and the Syrian hamsters after places including Powys and Warwick.

Sue Adkins, manager of the CAH, said Louise did a great job of looking after and observing the animals.

She said: “We bought in some new mice in January and it was up to Louise to name them. She’s a big Twilight fan and has read all the books. She picks themes to name the different groups of animals and for the mice it was Twilight characters.”

Louise, who attended Alleyne’s High School in Stone before coming to Harper Adams, will return to her studies in September and continue to work at the CAH at weekends and during holidays.

She has yet to see Eclipse at the cinema because she has been too busy at work but plans to see it as soon as she can. 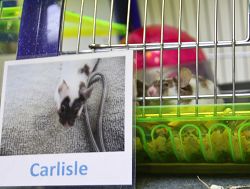