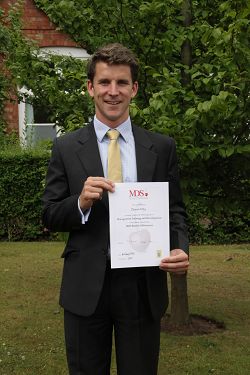 REEDNet is a network of England’s land based colleges led by Harper Adams University College in Shropshire and the Royal Agricultural College in Gloucestershire. It became involved with the MDS course three years ago and the partnership now has full academic accreditation and helps the students to find work within the food and fresh produce industry.

Charles Cowap, Director of REEDNet, said: “It’s been a remarkable journey since we first met with MDS to talk about the possibility of accrediting the training programme- which had run for over 20 years at the time. The solution to keep it going another 20 years was clearly Harper Adams and we looked at getting external validation and academic accreditation.

“We are meeting today to celebrate the achievement of these seven young people.”

The students, who are all now working at top companies within the industry, attended a special celebration event at the award winning West Midlands Regional Food Academy at Harper Adams and one, Dan Jolly, scooped a special award for having the best synoptic paper on the course which is now set to be published in the Fresh Produce Journal.

The 25-year-old, who now works at G's Marketing, said: “The course has really helped me get into the work I wanted. While doing my degree this was the field I was aiming for. I would definitely recommend the course.”

Dan, from Roudham in Norfolk, originally studied Plant Science at Durham University. He added: “I definitely put the work into the course so I am pleased with my results. I am really happy my synoptic paper is going to be published as well. It’s been an excellent couple of years.”

Doug Henderson, Chairman of MDS spoke of the “unique relationship” that has been developed with Harper Adams and called Charles Cowap a “champion”.

He said: “We believe the programme offers noteworthy benefits to our trainees and the industry that follow from MDS and Harper Adams working in partnership.”

Kirsty Connolly, another high achiever on the course initially studied Forensic Science at Staffordshire University. The 24-year-old from Reading is now working as a buyer at Barfoots of Botley.

She said: “I was quite surprised at how well I did as I had no agricultural knowledge before I started the course. I think it has mainly showed me what skills I had in the industry. I thought I would go into something technical, but when I started I realised I didn’t like that kind of work. The course has opened my eyes to opportunities I never would have considered before.”

The seven students who will officially graduate in September are Shuel Miah, Giovanni Effori, George Beedell., Rhea Dalglish, Dan Jolly and Kirsty Connelly and Fraser Caldier – who was unable to make it to the celebration event. 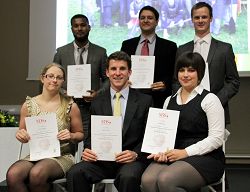