Local charity get a purr-fect treat from Harper 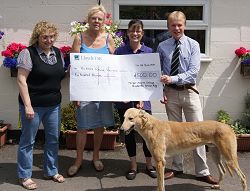 Another local charity has reaped some of the benefits of a year’s fundraising activities by Harper Adams’ Student Union.

Hilbrae Kennels in Cold Hatton, Telford, has been handed a cheque for £500 thanks to the efforts of students at the University College.

The family-run boarding kennels cater for dogs, cats, small pets and cage birds. There is also a rescue kennels where the stray and abandoned dogs from Telford and Newport stay while waiting for their owners to reclaim them or until new homes are found.

Hilbrae is also the area kennels for Doberman Rescue Ltd taking unwanted and abandoned Doberman’s from Shropshire and the West Midlands.

Last year’s Harper Adams Student Union President Chris Manley wanted much of the £15,000 that the Raise and Give (RAG) team raised over the year to go to local charities and he asked Jan Fordham, Student Union Finance Officer, to pick one.

Jan, a dog lover, chose Hilbrae Kennels. She said: “I love dogs and have had four rescue dogs myself. Hilbrae are very deserving – it’s where the police take all the rescue dogs they pick up and they try and re-home them all.

“The more publicity they get the more they can do. I know they were really pleased with the money as it means a lot to smaller charities.”