Air Ambulance picks up £500 from students 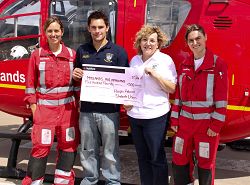 The Midlands Air Ambulance made a special landing today to collect £500 raised by students from Harper Adams University College in Shropshire.

The Midlands Air Ambulance is responsible for funding and operating three air ambulances serving the Midlands and Welsh border region and is funded solely by the public and local businesses, receiving no Government money or National Lottery funding.

New Student Union (SU) President for 2010/11, Pete Dodd, said handing over the cheque today at the RAF Cosford base in Shropshire was one of his first jobs as president in an official capacity.

Pete, 23, from Teesside, has just completed his BEng in Agricultural Engineering after studying at Harper Adams for the last five years.

He said: “This money was raised by the 2009/10 Raise and Give (RAG) team. Last year’s SU president, Chris Manley, chose to give £500 of it to the Midlands Air Ambulance.

“It’s a great local cause and the air ambulance has even been here to help us at Harper Adams when people have had sporting injuries. The Midlands Air Ambulance relies heavily on donations so I am very pleased to be handing over this money today.”

Last year’s RAG team raised £15,000 and Pete hopes that will be exceeded this year.

Jason Levy, Head of Fundraising and Marketing for Midlands Air Ambulance said: "We would like to thank Pete and Jan and all the students who have fundraised at Harper Adams.

"We are absolutely delighted that the student community is getting behind us but we appreciate all the support we get from across the region."

For more information on the Midlands Air Ambulance, go to www.midlandsairambulance.com or call 0800 8402040.