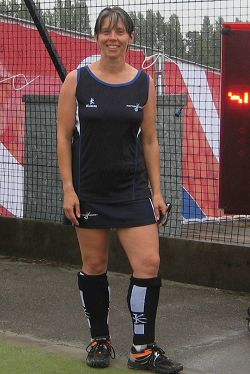 A lecturer at Harper Adams University College has been rubbing shoulders with Olympic bronze medallists thanks to her passion and talent for playing hockey.

Dr Sandra Pattinson has played the sport for 35 years, starting in primary school, but has more recently found herself representing Scotland at the Women’s Masters Champion Cup, beating Australia.

She now hopes to carry on her streak of success by continuing to play the sport at a high level, alongside her duties at the University College where she teaches in the animals department.

Dr Pattinson said: “I’ve played hockey for years, but recently trialled to become part of the Scotland Masters team for over 40s.

“Following the trials at Stirling, I competed at the Borders Festival of Hockey near Galashiels.  I was then selected for the Over 40’s team for the Home Nations championship in Swansea in June, where we beat Ireland 3-0, Wales 5-2 and drew 3-3 with England”.

Scotland later went on to win the overall title on goal difference with the Over 45’s also winning the title in their age group.

Following the Home Nations, a combined squad was then selected from the Over 40’s and 45’s.  This team competed in the Masters Champions Cup at Nottingham- a competition that ran alongside the Women’s Champions Trophy, which included the top senior teams in the world such as The Netherlands and Argentina, and a men’s Four Nations competition.

In the Masters contest, Scotland came out top over Australia 2-0 and 1-0, but lost twice to England in hotly contested matches, both of which finished 2-1.

Dr Pattinson said: “It’s been amazing working up to compete at such a top level, but also to be part of a team of women; some of whom have represented Great Britain and played in the Olympics; and to face quality players from around the world.”

The Lilleshall resident has also played in midfield and defence for Telford and Wrekin Hockey Club for the past 15 years, represented Shropshire, and plays for the Midlands Over 40’s team.

But, this has not been without support from her family, who are also mad about the sport. She added: “My husband, Sandy Mackenzie, and my children, Callum and Lorna, are as mad about sport as me and all enjoy playing hockey. I like to keep fit so as well as the time I spend training and playing in matches, so I also go running and I’m part of Newport and District Running Club.

“The whole experience has been fantastic so I’m going to keep going and carry on playing hockey for as long as I can.” 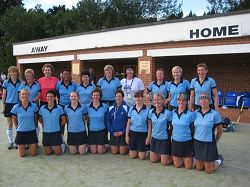