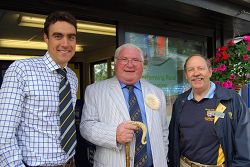 It was a bumper week for the Harper Marketing team at the Royal Welsh Show this year after scooping a top spot on the showground and securing plenty of interest in all aspects of the University College’s work.

From undergraduate degrees to professional short courses, both prospective students and alumni made sure that they stopped by the stand to get the latest information about Harper.

This year, the University College was located in the LANTRA building, a prime location near to the main arena. Head of Marketing, Richard Jopling said: “The move has been a great success for us because it is such a great location, we’re right in the hub. There has been lots of interest in all areas – undergraduate, short courses and recruiting placement students.

“The Royal Welsh has come on leaps and bounds. It helps to raise our profile in Central Wales and promotes Harper Cymru, the Welsh student society. I hope that we can secure a similar location for next year.”

Dai Jones, also a television presenter, talked about the role agriculture plays in producing food for the nation, and that “we all need to eat.”

The Royal Welsh Show takes place at Builth Wells, Powys, and it is predicted that more than 200,000 people visited the event which spans across four days.

Mr Jopling added: “It’s always been a popular show, but now more than ever after the collapse of the Royal Show. Marketing Officer, Bertie Hancock, and his team have done an excellent job in welcoming people to the stand. It’s been a fantastic success.” 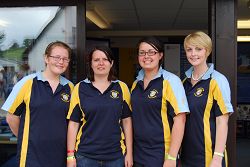