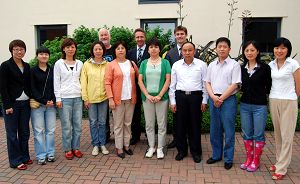 A delegation of Chinese central and provincial government officials visited Harper Adams University College in Shropshire last week to learn about agricultural and food marketing here in the UK.

The group stayed at Harper Adams, near Newport, all week to under take a training course on Agricultural and Food Marketing led by Business Management and Marketing Lecturer, Simon Thelwell.

This is the third such training course to be held at Harper Adams.

As well as under taking lectures here at the University College, the group also visited the Royal Welsh Show, Sainsbury’s distribution centre and several local farms.

Simon Thelwell said: “This has been a great opportunity to showcase the work we do here at Harper Adams and within the region to the delegates, during the week they have learnt about Dairy, Arable and Poultry production in the UK as well as attending workshops on marketing, collaboration and retail.”

Unfortunately, six of the originally planned group had to remain in China to deal with the recent severe flooding in Jiangxi Province.

Another feature of the week was a fair-trade themed lunch and seminar, hosted by Senior Lecturer, Doug Hill. The talk highlighted new ways of marketing and how to add value to the supply chain.

The University College is currently bidding to renew it's fair-trade status, and the Chinese delegates were treated to a selection of fair-trade goods including tea and coffee, biscuits and cakes.

To find out more about this event, watch the video.