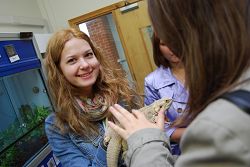 A group of eight young people from Belarus were taught how to handle small animals at Harper Adams last week as part of a recuperation break in the UK.

The girls visited the University College thanks to the Endon Chernobyl Children’s Project – a charity that raises money to provide young people affected by the disaster with a four week holiday to help them to recover from illnesses such as cancer and leukaemia.

While visiting Harper, they were able to handle a range of different companion animals, including rabbits, guinea pigs, fancy mice, a snake, a bearded dragon and a leopard gecko.

Lindsey Gilbert, Group Secretary for the charity, said: “During their visit to the UK they spend two weeks with a host family where they’ll go on walks, day trips and visit the dentist and optician. They then move on to Cicely Haughton School in Staffordshire and spend time as group, with trips to the beach, Alton Towers, Gladstone Museum in Stoke-on-Trent and London.

“Coming to Harper Adams has been great. They don’t tend to have small animals at home and aren’t used to having pets because they are seen as a luxury. They really do appreciate everything that they experience, so something as simple as this really interests them.”

Belarus still has high radiation levels,  24 years on from the disaster, which saw a nuclear power plant at Chernobyl explode. The country was declared a ‘zone of international ecological disaster.’

A short visit of only a month to a ‘clean’ country can boost their immune systems by up to two years, particularly if it is during the summer, when the radiation levels in Belarus are at their peak.

Yulia Kravchenko was part of the group that visited Harper Adams. The 20-year-old said: “When you handle the animals it’s relaxing and you feel close to nature. I wish that more children from home could have the chance to come here, it’s been really interesting.”

The charity has been organising trips to the UK for 13 years, and raise funds by organising events such as coffee mornings, car boot sales, cycle runs, dinner dances and quizzes. This year they brought 14 young people over to visit the UK, ranging from 16 to 22 years old.

Sue Jeavons, Manager of the Companion Animal House, showed the girls how to handle the animals correctly. She said:  “We have this facility here at Harper Adams and thought it would be a great way to introduce the girls to the kinds of animals that we keep as pets here in the UK.

“It’s been fantastic seeing them getting involved, particularly handling the more unusual animals. It’s been an absolute pleasure to meet the girls and do something to help such a great charity”

For more details about the charity visit http://www.chernobyl-children.org.uk/ or contact John and Julie Gator on 01782 535000 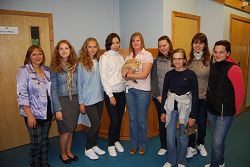