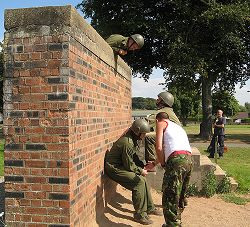 Up and coming managers at Harper Adams spent two days testing their physical and mental abilities at an Army-style residential course in Shrewsbury.

Exercise Mercian Pursuit is organised by 4 MERCIAN on behalf of SaBRE – an organisation that supports Britain’s reservists and employers, and sees participants take on a series of challenges designed to identify and develop leadership and teamwork skills.

The Harper team consisted of ten members of staff from a variety of different departments and one civilian mentor. They were also joined by two employees from Grow Continental.

David Nuttall, Catering Manager at the University College, said: “Wow- what a great experience. I learnt so much about leadership in extreme conditions with limited resources.

“It never fails to amaze me what can be achieved from a motivated team in intense circumstances. Every aspiring manager and leader from Harper Adams should attend.”

The exercise began at Copthorne Barracks with a series of lectures and seminars about the reality of war from a range of volunteer reservists from the 143 Brigade, Territorial Army.

Once everyone had been briefed, the six teams, including Harper Adams, were then taken to Nesscliffe Training Camp for around 24 hours of practical activity and competition against each other.

Food Technologist, Joanna Gleeson, thought the event was a fantastic experience. She said: “It pushed us all physically and mentally, taught us some really good teamwork skills and helped us all think outside of the box.

“I think we were all amazed at how much we could achieve when we had to!”

Overall, Harper Adams scooped second prize beaten by only one point, but were also awarded a special prize for the top score on the firing range task.

Acting Communications Manager, Janine Heath, said: “It’s quite possibly one of the most difficult things I have ever done in my life.

“I’m elated to have succeeded though, and now appreciate my colleagues in ways that wouldn’t have been possible without this exercise.” 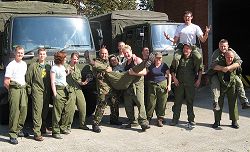 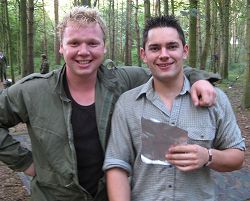