The UK’s Best University College – 4th Year in a Row 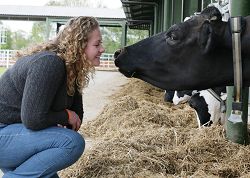 The University College has also scooped the top spot in the ‘Fewest Unemployed’ category, was 14th in the ‘Most in Graduate Level Jobs’, and was also 14th in the UK for student satisfaction.

Harper Adams was first named the UK’s Best University College in its debut appearance in the guide in 2007, when it was also short-listed for University of the Year.

The ‘Fewest Unemployed’ figure was devised from Higher Education Statistics Agency (HESA) data, which showed that only 2.9% of Harper graduates were not in work six months after leaving the University College.

Alistair McCall compiled the guide, which was published yesterday. It said: “With applications to Harper Adams up by 35% this year, getting a place at arguably the premier centre for land-based studies in Britain has just got a lot harder.”

Principal, Dr David Llewellyn, said: “We are delighted to be named again as the UK’s Best University College which shows continued recognition for the quality of our teaching and employability of our graduates.

“Gaining at place at Harper Adams is becoming increasingly competitive so we encourage applicants for 2011 to visit Harper Adams at one of our open events as soon as they are able so that can see, at first hand, the excellent courses and facilities we offer.”

Opportunities to visit Harper Adams include an open afternoon on September 22, and an open day on October 17.

All of the league tables and the Harper Adams University College profile can be viewed at http://www.timesonline.co.uk/tol/life_and_style/education/sunday_times_university_guide/