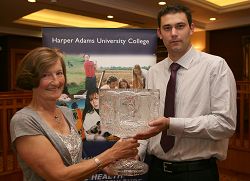 The Association held its dinner in the Killyhevlin Hotel on Saturday evening (September 11) bringing together former graduates and special guests associated with the Shropshire-based University College.

Mr Joe Lawson, Chairman of the Harper Adams in Ireland Association presided over the event and the guest speaker was Conservatives and Unionists MEP, Jim Nicholson.  Mr Nicholson made reference to the need for research and skills development to help address the challenges faced in food and energy production over the next few decades, the current focus on CAP reform and the importance of the Food Security debate within the European Union.

Dr David Llewellyn, who has been Principal of Harper Adams since September 2009, attended the dinner.

Dr Llewellyn, said: “The Harper Adams in Ireland Association dinner is an important event in the University College calendar and the topics mentioned by Jim Nicholson are areas where Harper Adams has considerable expertise, extending across the food chain and into farm-based energy production methods, such as anaerobic digestion.

“In working on these themes our links with industry are of the utmost importance to us and we will continue to work to develop our partnerships with institutions and businesses across the island of Ireland.

“We are pleased to welcome students from Northern Ireland and the Republic of Ireland each year to Harper Adams and there is a very active Harper Ireland Society at the University College. It is great to see our graduates when they return to the Association dinner and to catch up with their progress in the agricultural industry.”

One of the highlights of the event was the presentation of the Truesdale Award, a prize sponsored by animal feed supply company John Thompson and Sons based in Belfast and presented by Mrs Ann Truesdale. The award is named after the late Victor Truesdale who supported links between Harper Adams and the feed industry.  This year it was given to Agricultural Engineering student, Andrew Helen from Co. Cork, for his active involvement in the corporate student life of Harper Adams.

In accepting the award and thanking Mrs Truesdale and the sponsors of the award, John Thompson & Sons Ltd, Andrew spoke of his involvement on the committee of the Harper Ireland Club for students from Ireland and in the activities of the club.

An award was also made to former Principal, Professor Wynne Jones, to acknowledge his support for the Association over many years.

All the ingredients for the meal were sourced from local suppliers including Moy Park, Silver Hill Foods, Kettyle Irish Foods and Fivemiletown Creamery.
Harper graduates from all over Ireland travelled to Enniskillen for the event. 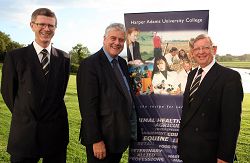 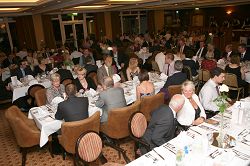