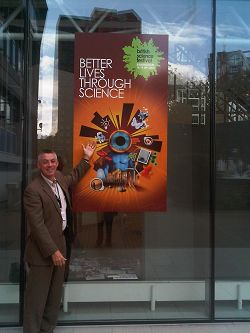 One of Harper Adams’ resident food security experts spoke to visitors at one of Europe’s largest science festivals about ‘plants, pathogens, producers and the public’ earlier this week.

Vice Principal, Professor Peter Mills, was part of the Food Security and Infectious Diseases programme at the British Science Festival held at Aston University, Birmingham. Other speakers included Professor Tim Lang of City University, London, and the meeting was chaired by Professor Brian Ilbery of the Countryside and Community Research Institute (CCRI).

His talk at the British Science Festival explored the impact of plant diseases on food production, the lessons learned from recent epidemics and how stakeholders across the supply chain might constructively contribute to decisions made by Government on plant health issues.

Professor Mills said: “Reducing the impacts of plant disease is critical to producing the food required to feed an increasing global population.

“Losses are currently around 10% in the developed world, and as much as 15% in the developing world.  We cannot afford to continue to lose this level of production”