The 2010 crop of Harper Adams students graduate in style 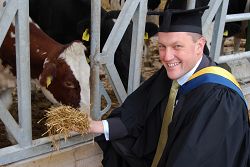 Harper Adams today welcomed more than 1,500 guests to see this year’s crop of students graduate in the biggest graduation ceremony to date at the University College.

More than 600 students were joined by their families, friends and VIP guests at the Shropshire-based campus, to celebrate their achievements and collect their graduation certificates.

Gowning started at 9am and during the morning prizes were given out to students for their achievements during the last academic year.

These prizes were sponsored by a range of companies and organisations with which Harper Adams has close links. The winning students were joined by their family and award sponsors for lunch following the prize-giving.

The ceremony, which started at 2.30pm in a grand marquee, was overseen by Principal of Harper Adams, Dr David Llewellyn.

Dr Llewellyn said: “We have seen a large increase in applicants for courses this year -35per cent up on 2009. This is the fourth year in a row that Harper Adams has been named University College of the Year by the Sunday Times University Guide.

“The Sunday Times also said we were ‘arguably the premier centre for land based studies in Britain’. I don’t think there’s much to argue about but it shows a tremendous amount of dedication by all.”

Dr Llewellyn thanks students for their “contribution to the life, soul and spirit of Harper Adams University College”.

He added: “The ambassadorial role is no less important as you begin your careers. You are leaving a university which is pushing back the boundaries of knowledge.”

This year, five VIP guests were the recipients of Honorary Degrees and Fellowships.
Farmer and television presenter, Dr Jimmy Doherty of the BBC’s Jimmy’s Farm and Farming Heroes became a Fellow of the University College.

A further fellowship was awarded to Mr Richard Matson, equestrian expert and entrepreneur, based at Twemlows Stud Farm in North Shropshire.

Sir Anthony Bamford DL, after whom the Harper Adams Bamford Library is named, received an Honorary Doctorate of Science.

Sir Anthony, Chairman of JCB, was honoured for the outstanding contribution he had made to agricultural engineering, both in the UK and worldwide.

A further Honorary Doctorate of Science recipient was the Agriculture and Horticulture Development Board’s Chief Scientist, Professor Ian Crute CBE, in recognition of his “leading role in crop research and associated disciplines and his role in national agriculture developments”.

The final Honorary Doctorate was presented to staunch supporter of the rural economy Baroness Byford DBE.

In accepting the honours on behalf of all of the Fellows and Honorary Degree recipients, Baroness Byford offered her sincere congratulations to all the students.

She said: “Individually you have achieved a great deal, but as a University College, your contribution to agriculture and the rural environment is outstanding.”

Student Union President for 2010/11, Peter Dodd, who also graduated today, moved a vote of thanks to the Governors, Principal, lecturers, Baroness Byford, parents guardians and friends.

He said: “The time has come for us to put into practice the skills and knowledge we have gained over the last few years and make the foundations of our futures.” 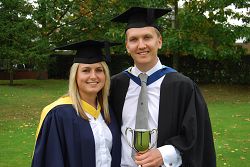