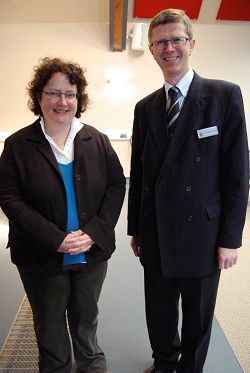 The Welsh Minister for Rural Affairs has made a special visit to Harper Adams University College to speak to and answer questions from staff and students.

Elin Jones, a Plaid Cymru- Party of Wales member, was elected to the Welsh Assembly in May 1999 and served as Shadow Economic Development Minister during the Assembly’s first term.

In 2006 she became Shadow Minister for Environment, Planning and Countryside and in 2007 she was made Minister for Rural Affairs.

She was welcomed to the West Midlands Regional Food Academy at Harper Adams in Shropshire by the Principal, Dr David Llewellyn.

As Rural Affairs Minister, she explained that she met regularly with colleagues from the Department for Environment, Food and Rural Affairs (DEFRA) to discuss issues affecting all four countries in the UK.

She discussed important issues such as the role of Government in response to climate change and the political commitment to reduce greenhouse emissions and the prospect of using “less productive” and environmentally sensitive land in Wales for timber and woodland farms.

Another important issue she raised was that of endemic animal diseases such as Blue Tongue, Foot and Mouth and TB in badgers and cattle and ways to tackle them.

She said: “I think there has been a shift over the last few years whereby farming and food production and the management of land are all seen as important services by the public and by the Government.

“And I want to invest and see particular attention on the younger generation. I have been impressed by the interest young people have in these challenging times and that motivates me do more.”

The Minister said the Welsh Government was interested in the future of farming and for the first time a young farmer’s entrance scheme had been set up during the last financial year.

She added: “Putting some funding and effort into a scheme about young farmer’s entrance has been a highlight of my term.”

Questions were then asked from staff and students about topics including biodiversity, genetically modified crops, forestry and TB in other wildlife.

Dr David Llewellyn thanked The Minister for coming and said: “It’s been very a enlightening talk about the blend of politics and farming.”