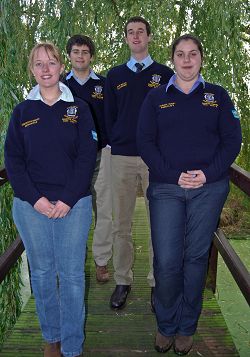 The Harper Forum is now up and running for the 2010/11 academic year at the University College with The Right Honourable Lord Smith of Finsbury kicking off the programme of speakers.

This society comprises of four second year students, who took over running the group at the end of last term.

The forum sees topical speakers from the industry invited to talk to the staff and student body at the University College.

The first guest, The Rt Hon Lord Smith of Finsbury, will be speaking to students at 7pm tonight in the West Midlands Regional Food Academy (WMRFA).

Lord Smith has had a long and varied career in politics, starting in 1983 when he became MP for Islington South and Finsbury.

He returned to the back benches after the 2001 election and stood down from the House of Commons in 2005. Immediately afterwards he was created a life peer, taking the title of Lord Smith of Finsbury and took his seat in the House of Lords in July 2005.

He has also been chairman for a number of other charities and is a Visiting Professor in Culture and the Creative Industries at the University of the Arts London, and an honorary Fellow of Pembroke College Cambridge.

Eight other guests have been invited to speak at this term’s Harper Forum including Jane King from Farmer’s Weekly, Professor Ian Crute CBE, The Agriculture and Horticulture Development Board’s Chief Scientist who was recently made an Honorary Doctor of Science at Harper Adams and Rebecca Geraghty, Sector Director for the Home Grown Cereals Authority (HGCA).

Harper Forum Chairman, Same Bales, a BSc (Hons) Agriculture Student from Norfolk, said: “The Forum is aiming to build upon its previous year’s success. It is an excellent place to come and listen to top industry professionals and learn what they do and how they got there.

“We start off the year in a new location, the WMRFA and look forward to a timetable packed with quality speakers. We would also especially like to thank our sole sponsor- Frontier, which allows us to host the speakers.”

All Harper Forum events are free for staff students and friends. For more information about this term’s programme email Sam Bales at 09067400@harper-adams.ac.uk