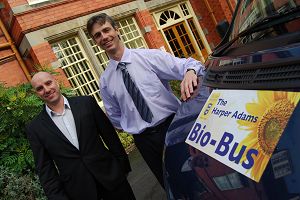 A free mini-bus service that runs students from Harper Adams to Telford to do their shopping is now being powered by waste vegetable oil.

The bus, which also runs to Newport, has been trialled on bio-diesel for the past 9 months in a variety of different weather conditions, but has now been given the official go ahead to become a permanent service.

Office Services Manager, Marek Hammond, said: “The mini-bus service originally came about because we have a lot of international students that come to Harper, which is a rural-based campus, without their own transport.

“It has been really popular, achieving patronage figures of above 60%. Now that we are using bio-diesel, we hope to attract even more students to the service and introduce the next generation of business leaders to genuinely sustainable transport.”

Lecturer Phil Hollins spearheaded the production of the fuel and has since integrated it into a number of courses delivered at Harper Adams. He said: “What’s really encouraging is that the background to bio-diesel production, with respect to environment, can now be demonstrated ‘hands-on’ as opposed to just lecture theatre presentation.

“Furthermore, the byproduct of bio-diesel is glycerol, and this is can act as a feedstock enhancer for the new Anaerobic Digestion Unit at Harper Adams, due for completion in 2011. This is where the major efficiencies lie for CO2 reduction.”

Harper Adams has a strong commitment to the use of sustainable transport with the use of electric vehicles and a car share scheme. It has also implemented a host of sustainable technologies including photovoltaic solar panels and a Biomass Combined Heat and Power Generator.

For more information about bio-diesel at Harper Adams, see http://www.harper-adams.ac.uk/press/article.cfm?ID=2963&archive=true&year=2009