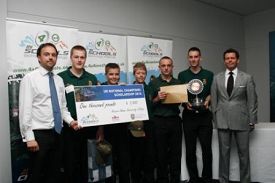 Young engineers from across the country have been battling it out for a £1000 scholarship at Harper Adams University College in a competition to design and build a remote controlled vehicle.

Teams of students aged 14-19 spent hundreds of hours perfecting their vehicles for the 4x4 in Schools Technology Challenge National Finals, held at the Heritage Motor Centre in Gaydon.

The prize is a scholarship for one of the team members should they choose to study engineering at Harper Adams.

Winning team, ‘126 Pathfinders’ from the 126 Squadron Air Training Cadets, Derby, showed off their skill by using high grip tyres and an adaptable steering mechanism. This negotiated the challenging surfaces and obstacles on the model off-road track with ease.

16-year-old team member, Brett Payne, said: “We’re over the moon to win this and it’s definitely made me want to go into engineering when I finish school.”

Engineering Lecturer at Harper Adams, Greg Rowsell, agrees that the principal behind the competition is to encourage young people to consider careers in highway engineering.

He said: “For me, it’s about promoting engineering to young people and to show them what the industry can offer them. It’s also a fantastic way of promoting Harper Adams and the courses we offer, such as off-road vehicle design.

“Two or three of the six winners were interested in the scholarship, so we’ll have to see what happens when it’s their turn to apply for university.”

The competition is sponsored by top engineering companies such as Land Rover and JCB, and brought together the top nine school and youth group teams after a series of regional heats.

Dave Lakin, 4x4 in Schools Project Manager, said: “The approach and hard work that has gone into designing these vehicles is amazing and the ingenuity of the teams in perfecting their entries is admirable.

“All the teams put in tremendous effort and show the value of this type of challenge which brings to life some of the skills which are the foundations of so many careers in industry today.”