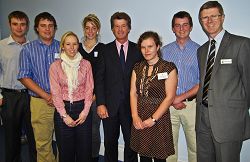 The Vice President of the National Farmers Union visited Harper Adams last week to speak to students about the organisation and find out what more it could do to help younger people.

Gwyn Jones had lunch with this year's student wardens and Principal of the University College, Dr David Llewellyn.

Mr Jones wanted to find out from the group what more the NFU could do to help students and younger people and he discussed what the NFU did.

Ellie Meadows, a final year BSc (Hons) Agriculture student, said it was "really interesting" to hear about the work of the NFU as most of the students were unaware.

Ellie, 21, from Dorset, said: "Mr Jones asked us what we thought the NFU could improve and the main things we said were to publicise themselves more and we suggested they work more with schools and Young Farmers groups."