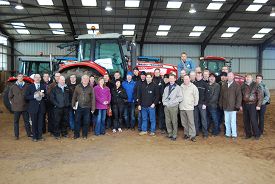 The Regional Food Academy lecturer theatre at Harper Adams was packed out once again for this week’s forum aimed at exploring the 2013 reforms to the Common Agricultural Policy (CAP).

NFU Head of Economics and International Affairs, Tom Hind, opened the forum by explaining the history of the CAP and how it had arrived in the UK.

The UK currently receives around €4 billion of CAP funding of which it is known that a large proportion is given to farmers in direct payments (pillar 1), with money also invested in the environmental and rural development programmes (pillar 2).

The main objectives of these principles and policies will remain after the reforms.

Mr Hind explained that public are often very negative towards the CAP, however, an EU survey found that 77% of correspondents were ‘for’ or generally ‘with’ the policy.

With this in mind, he went on to state the challenges that CAP reforms pose.

• The public support and support of all members state through fair distribution of the budget.
• The EU Budget itself – size and orientation.
• Competition for resources for the budget - balancing agriculture, investment, infrastructure and many more key areas.
• Co-decision & EU Parliament – working through the multi-stages of EU law passing. (2-2.5 years is expected).
• Rationale for Direct Payments- Mr Hind suggested this meant they need to be justifiable and one idea for this is to involve environmental factors into farming payments.

The first known proposals for policy changes are to be seen from November 17, but the details of this are already known and state three options ranging from no change to a radical reform.

It was explained that it is foreseen that both Pillars will remain and so will direct payments until at least 2020. But, these will be more “moveable’’, meaning it will be more uniform between states, but versatile in order to maximise market interaction, rural development and environmental farming.

As predicted, this plan has already led to much dispute. There are clusters of states whom are either for no change such as Ireland, a Liberal approach such as the UK, or the vivid supporters of agriculture support such as France.

Mr Hind concluded the Forum by bringing in the NFU’s vision of CAP and agriculture to the UK. He said that the NFU believes that agriculture is “central to the future economic agenda”, and that work is needed to help farmers become less reliant on public support.

In summary of the CAP 2013 reforms Mr Hind expects i) Smaller CAP budget, ii)Redistribution, iii) Direct Payments to remain core but a slight shift to environmental work, iv) Climate Change to become more involved, v) Evolution which could make agriculture into a social instrument rather than a business- something we should be cautious about.

Next week’s forum is by James Mayes of Sentry.