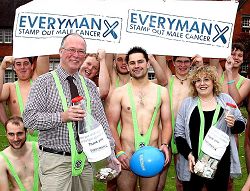 The brave students bought the'mankinis' - similar to those featured in the cult film Borat - and wore them around campus all day.

Money for Everyman was raised from the sale of the outfits and from donations.

Student Union President Pete Dodd said he hoped the total would smash through the £2,000 barrier.

He said: "There are 60 people in mankinis including 15 members of staff. They were worn all day to raise awareness.

"Money is still coming in but it looks like a great total."

The Student's Union raises between £15,000 and £20,000 for various charities
each year with imaginative stunts.